Traveling is full of different challenges from back home.  Taking public transport when you don’t know the language, the system, or any of the place names.  Bartering properly, which changes between countries.  Ordering food when you have no idea what any of it is. (Just do it! Play the culinary lottery! I love this one!)

And of course, border crossings.

Crossing from South Africa to Botswana involved a moderate amount of bureaucracy, a couple forms, a couple stamps.  The best part was when a guard peered in the window and saw the copy of Obama’s The Audacity of Hope that I was reading and came around to talk to me about it.  Despite his not speaking English, we got by on a few words, several smiles, and a big thumbs up.  (We would continue to see Obama bags, posters, and shirts throughout Africa…it is a better time to be an American.)  As we were leaving, another guard looked at our friend Lisa’s shirt, which had kind of a sherbet-colored swirl of reds and oranges and said in a soft, deep voice “I like your shirt, I want to eat it.”  We laughed and smiled politely and drove on up the road.

I crossed the border between Zambia and Tanzania on a train, sweating and gritting my teeth because I had substantial food poisoning and you can’t use the toilets (which are just holes in the ground over a short curved tube) when the train is stopped…particularly when the train is surrounded by women and children selling bananas, casava root, and balls of clay to passengers.  The clay is apparently to clean out your digestive tract…maybe I should have bought two. 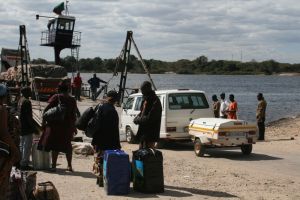 We crossed from Botswana to Zambia at the Kazungula ferry over the Zambezi River.  The Botswana side was only a little waiting, filling out forms, and stamping, then we drove down to the river, past a mile-long line of trucks waiting about a day to cross.  Luckily cars cut to the front.  The ferry is a rickety platform of splintered planks falling into dust, and the rustiest, oil-leakingest motor I have ever seen hanging off the side.  It fits a couple trucks at a time, and when loaded unevenly the entire thing has tipped, killing everyone on board. Oh, and the river is full of crocodiles and hippos too, just for comic book good measure. Crocodilicious.

There were two trucks on the ferry when we drove up, and they gestured us on behind them, where our van basically fit, though when the ramp was lifted it also lifted the little trailer.  The poor thing looked kind of embarrassed, like it was at the Zambian proctologist.

There was a guard in camouflage walking around with a Kalashnikov, looking very conscious of the fact that if anyone actually made trouble for the ferry he would be desperately out-gunned.  Although the truck drivers might be able to back him up.  He stopped me from taking a picture, but turned out it was because he wanted to be in it.

On the Zambian side trucks sat in the central African heat and dust, piled with jagged scrap metal, massive pipes for the mines, and who knows what else, going through a mysterious and largely invisible process to get their cargo across the border.  Luckily a local guy just happened to be there, yup, to help us, guiding us from office to office to pay our entry fee at Immigration, and get our entry stamp, and then our Customs and Excise stamp, and then pay the Counselor Fee, and then pay the Carbon Tax, and then pay the Road Toll Tax, and then get Third Party Insurance, which involved substantially more negotiation than your local State Farm Agent.  And no, I did not make any of those up.

While my two valiant compatriots were navigating this web of suspicious extravagance, I was our security guard and spent the three hours standing in the dust by our van and trailer, though I left my Kalashnikov at home.

First was a hustler-vendor, who wanted to sell me tourist kitsch, and to whom I eventually traded the hat I never wore for a safari mask.  Then there was a group of children, girls aged maybe 6 years old?  They had trays and baskets of brown bananas and a few small apples to sell to truckers, though I never saw anyone buy; their playground the massive dusty tires of semi trucks.  We stood in the shade of a shipment of mining equipment and looked at each other, my attempts at communication invariably met with indulgent smiles and clipped answers of “yes, yes” no matter what I said.

I gave them some of our carrots.  We smiled some more.  A prostitute walked over and climbed into the cab of the truck.  We all just kept standing there and smiling at each other while the stagnant stream of activity seeped along.  It was bizarre and heart-breaking. 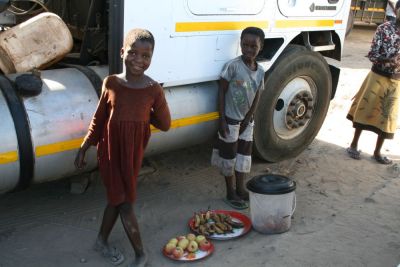 AIDS is killing its second generation in Africa, and there, just above and behind the heads of these children, maybe it was taking another victim, adding another link.  This stretch of highway through Africa is sometimes referred to as “The Corridor of Death,” as truckers drive up and down it, going to prostitutes and spreading the disease wherever they go.  Condoms are still a concept for NGOs, not daily people, and the spirit world is credited and blamed for many ailments, from Robert Mugabe’s power to the symptoms we would recognize as AIDS. 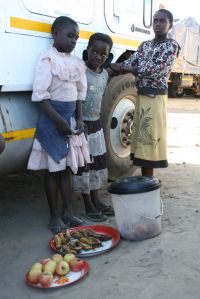 I stood by these children, totally overwhelmed and helpless in front of the situation, wishing I could spend a lifetime talking to them.  Instead we just stood in the dust and the heat and the noise.  They were no different than before she climbed into the cab, such things are everyday there.

A new voice behind me said in the slow slur of the drugged “hey man, howzit,” the South African slang for “how is it (going).” I looked at his bloodshot eyes, stained thick yellow by disease, then back towards the children. They were gone, leaving a tray of bruised bananas in the dust.

He proceeded to spend an interminable hour trying to sell me drugs and bum stuff off me, his speech barely intelligible and gaze unfocused. Once he found out we were headed to an orphanage he told me about a daughter he had, and how she needed some of our stuff and my money. He tried until we were literally driving away. The kids never came back to get the tray. 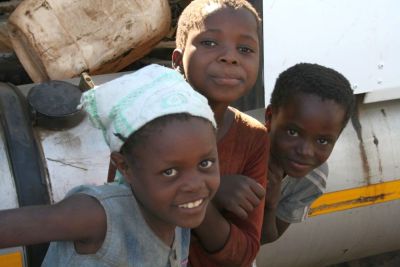 One thought on “Border Crossing and Zambia”