It’s not all bad for Maritza

I am supremely grateful for the privilege to write a few things for Altruvistas, the ethical travel company that facilitated my first Cuba and Venezuela trips, but sakes alive, that one from Peru (click here) is twice as depressing as I realized. I knew it was a bit heavy, but ay carumba. Let me tell you about later that day…

Yes, Maritza’s childhood has been brutal. She prowls around a room with an energy too much like a shark, too little like a child, but when she laughs, all that falls away, obliterated in the giggles of a seven year old. And her younger brother may have come to Casa Generacion barely able to speak, making sounds more than words, but after a few months of loving support in the house, he rushed up to me with a slew of questions, a couple answers, and an array of observations. Including: 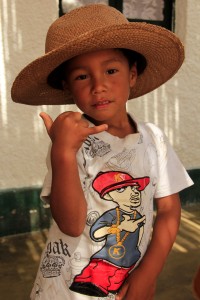 The kids at Casa Generacion thoroughly enjoyed my hat

“Señor Tim, we’re going to the beach now, and you can come too.”

These kids may come from harsh places, but they are still kids, as full of exuberance and enthusiasm as any, and the two young volunteers working that morning were happy to have another pair of hands to help out. Partway to the beach, surrounded by an electron haze of running children, I realized Maritza wasn’t wearing shoes and the pavement was burning her feet. Her brother ran up, kicked off his flip-flops for her, and held his little arms up to me.

Excellent problem solving. Beautiful sibling love. Happy kids, happy me. She slipped on the shoes and he began a stream of consciousness monologue that I could decipher just enough to find hilarious. Maritza walked beside us, corroborating or disputing his stories in turns. 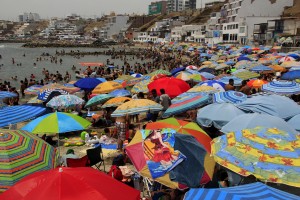 At the beach, the kids splashed in immediately. Little brother took a turn in the floating dragon-thing that they’d carried down, and one of the older boys showed me how close he could come to a handstand. I was watching him tumble over when I felt a small hand tug my finger. I looked down and found Maritza, looking up at me, eyes bright and serious. In her hand she held a small piece of a shell, which she placed in my palm. I thanked her and admired the pretty pink color, and she wandered away.

Little brother had passed off the dragon floater, and joined two other kids to dig one of the pointless and delightful pits that filled my childhood hours on the beach as well. I was considering joining them when I felt another tug on my hand. Maritza was back with another shell. Together we admired the purple hue, and this time she smiled after I thanked her.

She continued bringing shells to show me, which I was careful to only drop back in the sand when she wasn’t looking. We played for a couple hours before I helped the volunteers herd the horde back to the house, and I was sorry to say goodbye to them a few days later. But it was time to move on, with admiration for the work the people of Casa Generacion are doing, and one little piece of shell in my pocket to remind me of a child’s smile.

← Equanimity on the equinox, Cuba behind and ahead
Globalization on my head, from Cuba to Cambodia →