The expats and wealthier Indians I talked to were unanimous. From a bewildered “Shimla? Why are you going there? Just on your way to someplace better, right?” to the more succinct “Shimla sucks” it was clear: nobody liked Shimla.

A more nuanced opinion touched India’s omnipresent class divides. “It used to be nice. I think. But now, well, this may sound bad but a lot of working class people go there. It’s kind of a Poor Man’s Mountain Experience.” Ah. I see.

But I also saw a hill station in the lower Himalayan foothills, with slopes still green and trees still proud. The view from my room alone was worth the trip, and the train ride had been both beautiful and…cultural.

I was the only foreigner in the carriage, rattling along in a marvelous sea of inscrutable languages, but the smiles that broke out as the narrow-gauge railroad climbed into the mountains needed no translation. Cell phones were endlessly held in windows to take long videos and countless photos. Green is a compelling color. 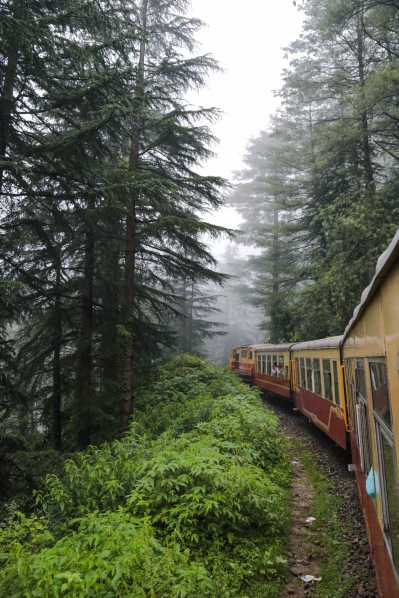 Their enjoyment of the natural beauty continued as they munched on the ubiquitous small bags of snacks, all of which were then tossed right out the window into the beauty they’d come to see. I was fascinated. And repelled of course, but the visitor can’t tell anybody what to do. I just wished I spoke their languages so I could ask, in the most polite manner possible, if they saw any conflict between coming to a place for its beauty and then covering it with incompostable garbage.

But well enough, we arrived in Shimla, where yes, construction is sprawling but at least they use color, so the variation of hues frolicked down the slopes in a motionless concrete waterfall. The view was still nice, and I took a deep breath of air that tasted less like smog than I’d had so far in India. Ubiquity breeds blindness, I suppose.

Shimla was in the clouds when we arrived, but the next day showed towns nestled into the swells of the mountains. And above it all, up where the trees still stood, a tangerine statue looked down on the growth and bustle. Walking closer I recognized the charismatic Hanuman, monkey god from the Ramayana. I’ve always liked him. The path to his overlook wound through trees where his smaller simian kin lounged on branches and dashed across sheet metal roofs with a sound like thunder. But I had a job to do.

Back in my hometown, the man who makes the popular Oaklandish shirts asked for photos of me wearing one in exotic locations. I figured a gigantic monkey god might qualify. My selfie skills are pathetic, but I gave it a go. Selfies are big in India (they seem to be the primary occupation of a swath of earnest young men) and seeing me do likewise sparked the Indian love of taking selfies with tourists. My Oakland pride selfie might not work for its maker, but versions of it are going home all over India. 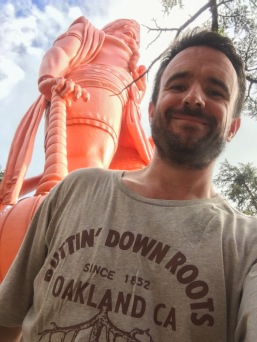 Back in Shimla, in a sheet metal shack where the guy sang Hindi pop songs while cooking my next curry over a propane flame, near my hotel staffed with young men thoroughly stoned on local hash, I decided Shimla’s not so bad. Sure it’s being pulverized by the presence of so many humans, but shit, so is most of the planet. If we’re going to hate everywhere humans ruin, it’s going to be hard to love.

Is that depressing? I don’t know. But I do know I enjoyed Shimla, though I wouldn’t want to live there and one full day was plenty. The next morning I was up early and on my way to the bus for a much more highly regarded destination. Manali was next…

12 thoughts on “Everybody hates Shimla”