I have good news for you. Are you ready?

This is relevant because it’s in Brussels, the UN capital, and because I think it’s purty.

You know how governments are useless at best, and evil at worst? And how everything was better back in The Good Old Days, is going downhill, and basically the world is totally screwed?

Wrong and wrong and only partially right! (We’re not talking about the environment today.) I submit for your consideration this article about how every country that the UN has data for has made improvements over the last decade or so in a number of areas, according to the annual Human Development Report.

I’ve noticed that few people actually follow links, so I’ll save you the time and give a couple quick quotes.

“in fact, ‘all countries’ have ‘accelerated their achievements’ in education, health, and income. Not a single country for which data was available scored lower on the UNDP’s human development index than they had 12 years earlier.”

“For example, violent conflicts are on the decline and freedom (in the form of electoral democracies) is on the march. Indeed, inter-state war has largely disappeared from the global system; and when conflicts do occur, they tend to be far less violent.”

I hadn’t thought of that. How often do nations go to war against other nations anymore? Not that it can’t happen again, or that other conflicts aren’t horrible, but the level of organization and industrialization of death that can be realized by a nation-state is capable of creating far more misery than any militia, as far as I can tell.

“there will by the end of the decade be approximately 3.25 billion members of the middle class, a dramatic leap from the 1.8 billion of just 4 years ago.

More people around the world can read and write; more go to school, more attend college and more women are getting an education than ever before. The latter point is of critical importance because we know that female education is one of the single most important development tools” 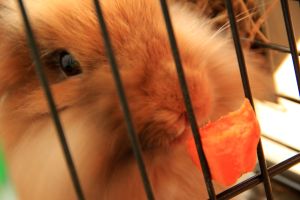 And does one really need a reason to put a bunny picture anywhere one pleases?

Yes and yes! And as for the news-network-forcefed talking point that governments are inherently useless: “All of this good news hasn’t happened by accident. As the HDR makes clear (pdf), they are the direct result of governmental policies on economic, trade and public investment, including a particular focus on investments in health and education.”

And to back this up, good old Ted Turner asserts that without the UN, “World War III would have already been fought and we as a species would have lost.”

It all kind of falls apart if you think about the environment, but for now, I’m just going to focus on the fact that humans, lots of them, are productively working to make life better for lots of others.

And that’s today’s good news. I just thought you should know.

← Life is one big game of Super Mario Brothers
Walking in the world, Brussels, Belgium. →

3 thoughts on “I have good news for you. Are you ready?”