Belgrade is a fascinating place, but after three days of wandering and awkwardly attempting to flirt with the hostel staff, I was ready to move on again.  So I bought a ticket to Bar, Montenegro.  The trip took 11 hours on paper, but I had heard that it usually lasted more like 13 (it actually took just over 14 hours) so I headed to the train station, hoping to find a comfy little corner of a train car to make a home in for half a day.

The winter sun had set by the time I got to the train station, and at night it was full of a lurking energy.  Empty trains were massive on nearly every track, standing silently like forbidding gods at your divine tribunal.   In among the shadows of iron colossuses was one which showed no outward signs of life, but was overflowing with people, arms (and maybe even a couple legs) hung out the windows like the wet laundry in the city.

Squeezing onto the train in my backpack felt like I was doing a training exercise for NFL tight ends.  Only since it was an Eastern European train yard after dark with steam blowing everywhere it was like the 49ers were playing Humphrey Bogart.  It smelled like salami and cigarettes. 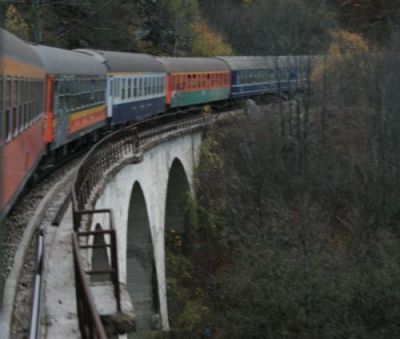 I found my compartment.  There were 6 seats, 5 taken by a Serbian family looking at me with incredibly incurious eyes, and the 6th with a tie draped over it that evidently belonged to the businessman standing at the window.  I made my apologetic gestures for “Sorry, I’m going to need to park my tush there for the foreseeable future” and Businessman grabbed his tie and gestured me to sit.  This meant climbing over the resolutely immobile family members, who lay like giant fleshy cannelloni in the dim light.  It felt like I was living a multiple choice question:

Q:  Climbing over the recumbent shapes of sleepy Serbians in a dark and crowded train car while carrying a big assed backpack will result in:
A: a smooth crossing and easy landing,
B: tripping and falling right out the window, or
C: tripping and landing face-in-crotch on the grandmother.

Luckily for me (since I don’t know the Serbian for “I’m sorry I fell in your grandmother’s crotch, but let‘s be friends”) I managed to pull off answer A.  It was a proud moment.

I was now ensconced with the weirdest train car family I met on my trip (though their only competition that I can think of offhand was a family on an overnight train to Stockholm with an insane Indian Einstein…and they just slept and ignored him, although they were very good at both.)  Once we were well underway these people were on a precise schedule of sleeping for 35 minutes, simultaneously waking up and talking at full Balkan volume for 15 minutes, then falling asleep again.  This repeated until some hazy minute around 3:00 AM when they all popped to their feet and disembarked, seemingly in a random and empty field.  I half-expected the conductor to tell me there was no town there and no one had gotten off, that I had been witness to the local legendary annoying ghost train travelers.

But before we left Belgrade, I got better acquainted with the businessman with the tie.  He was Russian.  He was drunk.  I’m sorry!  I really don’t mean to enforce stereotypes, and I am positively not saying Russians are always drunk, but this guy had clearly had a few.  We quickly established that I spoke no Russian and he spoke no English beyond “America?  Psh!” with an expressive shooing motion.  But he was amiable enough, shaking my hand several times and telling me extensive stories about his life story, or maybe how to build a hang-glider, or maybe about 9th century linguistic shifts in Sanskrit; as I mentioned, I don’t speak Russian.  I did understand when he invited me to go drink with him.  Very generous, and if I was a drinking man, I’m sure we would have had a fabulous night and/or gotten thrown off the train and/or reenacted Rocky IV.

He wandered off, and I spent the night with the Timetable for Madness family until they got off the train.  I was thinking I may be able to sleep now, but the train was overloaded, and as soon as their seats were empty I got a new set of companions, none of whom seemed eager to talk.  And the Russian came back.  Apparently he was unsuccessful in his carousing, because he came back stone sober.

This company proved beneficial because it meant I was awake and looking out the window as dawn burgled up and into the sky above the mountains of Montenegro, and gradually seeped down into the astonishingly picturesque valleys and slopes that surround the train route through the Dinaric Alps.

The Dinaric Alps are an example of karst, where the limestone mountains have resisted erosion, but water seeps down into the porous stone, dissolving it, creating jagged fissures and channels.  The water then travels down these and into the mountains, where it continues dissolving the hard stone, forming underground caves, tunnels, and grottoes, some of which eventually collapse, further augmenting the steep valleys of the mountain range.

The train sneaks along a series of ridges above these shattered sharp ravines.  The sun was rising over the mountain behind us, the darkness taking on shades that became a thick layer of fog breaking into individual patches which shrank when you weren’t looking into shy little wisps that lingered wherever they found autumn trees to hang in.

I stood next to my Russian friend and gazed in slightly gritty-eyed wonder at the green fields, craggy mountain slopes, and pastoral communities around and below us.  Then he blew his nose into his hand and flicked it out the window.  Repeatedly.  Then I noticed that his untucked shirttails were splattered with old blood.  Then, remembering shaking hands with him throughout the predawn hours, I resolved to wash my hands as soon as humanly possible.

We got to the capital of Montenegro, Podgorica, at a nice hour of the morning, early enough to be fresh, but late enough to be awake, and most of the train got off, including Comrade Snot-flinger, and I settled down in the suddenly spacious train car to see if I could sleep…I doubted it.

Right after I stretched out, a man in bright blue overalls walked past and looked at me in surprise.  I am sure I returned the look, not understanding the bright blue-clad figure standing over me like a Balkan Power Ranger.  He asked a question and immediately followed it with a shooing motion.

I realized it was several hours later, late morning, and the train had that steady feel of a large piece of metal that has been immobile for some time.  Oops.

I stumbled (literally) off the train and towards the train station in Bar.