My attempt as a futbol hooligan

Last night was the end of the Spanish soccer league.

This meant all day, from at least eight hours before the game, the town was full of small packs of soccer fans wandering around in jerseys, face paint, and flags worn as capes.  The mini packs of half a dozen young males looked like a cross between summer camp and Mad Max.  Their chants rolled out of nearly every bar, transcending linguistic norms with unending streams of shifting vowels, occasional sonorant consonants thrown in as place holders here and there. 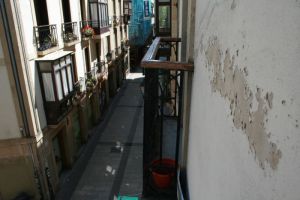 The street below my mini balcony in San Sebastian:

The chants sounded identical to those I remember from the Polish fans who took over Bratislava when I was there, except their chants all ended in an emphatic shout of “Polska!”  That and the groups here were not followed by equal-sized packs of policemen in riot gear.

With the guys who run the hostel and one of their friends I went looking for a bar to watch the game.  The first was showing the wrong game, the second was too smoky (even for Spaniards!), but just like Goldilocks raised me to expect, the third was just right.  Well, other than us it was all senior citizens who were fully intent on watching each other and seemed unaware of why we were staring over their heads, but good enough.

The ranking system is based on number of points scored, not winner take all, which is good in that it keeps everyone playing hard all game, no checking out in the third inning.  But the game was the number 1 ranked team versus number 19.  The first goal was off a defender’s leg, and in an embarrassing way.  The second was a minute later.  The third…the fourth…  For soccer 4 – 0 is a blowout. 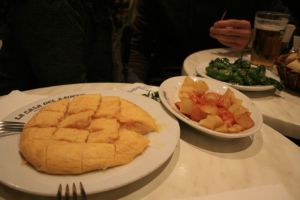 For lunch we’d eaten a big batch of paella, which is rice based, and I had been resisting its soporific pull all afternoon.  Then we ordered a little plate of patatas bravas to share, which are sort of like Spanish home fries (the middle one in the pic), and then I poured a beer on top of that, which combined with the patchy meager sleep schedule of hostel dorm rooms to leave me…can you guess?  Yeah, I fell asleep in my chair.  Right there in the restaurant, during the championship game, I nodded off.  Sorry Barcelona.

But hey, it was revenge for all the times visitors fell asleep during baseball games.  Sure, that’s it.

← The important one
Hello and good night →