November 3, 2010
Yesterday was a good day.  I got up at 2:30, morning still distantly in utero, to listen to the Giants win the World Series, which culminated at 3:30 just as the alarm was going off for Katrien and I to start our day-trip to the flea market in Brussels.  I ate my cereal and drank my green tea and I listened to interviews with the nostalgic giant Giants of my past, specifically Will Clark.  I bet his bald spot was shining proudly.  I wonder if he was wearing eye black?
Misty pre-dawn ride to Brussels in the camionette/fulgonetta/van, hips pressed close on the bench seat’s chilly upholstery and the ubiquitous lingering of cigarettes past.  Still streets of brick buildings with the rare, one or two, pedestrian looking confused at the solitude of Halloween’s non-event here.  A red devil mannequin sat on a bench, with a sign around his neck declaring the Halloween party sold-out, his plastic face wet with dew.
It was All Soul’s Day, November 2, and Brussels was waking up a little later than usual on this bureaucrat-inclusive holiday.  We passed a bus stop with a man sitting inexplicably and smoking in the paltry shelter of the plastic panel and pulled up to the curb opposite the small plaza where the daily market happens.
It was just after 5:00 AM, the trucks of flea market rubble had not yet arrived, so time for a drink in the café.  Green tea for myself and Katrien, coffee for the others at our table, beer for everyone else in the room.  The proprietor was a mountain of a man, with pockets the size of backpacks on the expansive backside of his jeans under a blue T-shirt with a dark ring of sweat around the neck and spreading from the arm pits; we were bundled in jackets, scarves, and gloves, he was a caloric wonderhouse.  His sweat’s domain grew as he served occasional beers.  I drank my tea and tried not to think about salt. 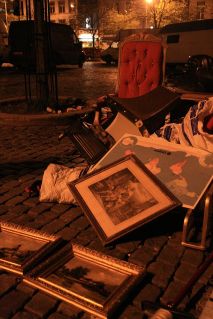 At no visible signal or glance at a watch our table stood up in lax military precision and headed out into the plaza where the first trucks were belching broken plates, warped records, and tarnished faucets onto the cobblestones.  The Regulars were already flitting between piles, flashlights in hand flicking around piles as they grew, impatience and the lust for Their Deal driving them sometimes to climb right up into the truck itself, wending between the unloaders talking at each other in rapid Arabic.
Most sellers also spoke French, and could probably understand Dutch, but Arabic was their comfortable language.  I shudder at the thought of the bitterness that must have sat rancid in this place as the traditionalists gave way to the new crowd.  The wailing and trills of Al Manar Radio’s mijwiz, qanun, and durbakke replacing traditional Belgian music; did you know the saxophone was invented in Belgium? 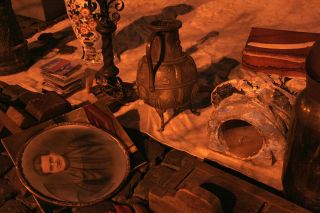 We wound from pile to pile, Katrien catching Flea Market Fever’s irrational fear of losing a deal to someone else and flitting off authentically while I meandered about, taking pictures and trying without success to detect if doing so was pissing anyone off.  I  37% suspect it was.
Three hours later I was tired and the sun finally lightened the sky in the brief gap of time between one pile of clutter and the next, and Katrien had bought a retro, red, two levelled table-thingy that we are now deciding whether to put next to the sofa or the fridge.  As a frequent partaker of hot cups of tea, I favour the sofa. 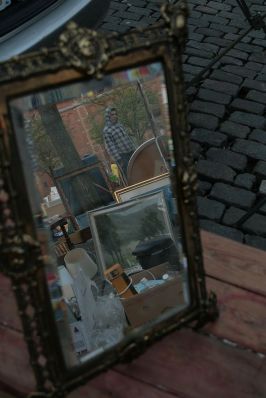 We witnessed the clientele shift with the day’s arrival, the wreckage aficionados disappearing like vampires who would never make Twilight casting were replaced by dog walkers and idlers who picked through disinterestedly.

We clambered back into the van, pulled up to load our driver’s purchases, a sliding-front podium-desk-thing, a 10 euro table that can hopefully be trimmed and revarnished to resell for 50, and a baby seat for the new niece, then headed home.
A nap, a trip to the high-tech gym, and a casual birthday party for Katrien’s sister rounded out the day and I went to bed happy, eyes ready to close, tongue reminiscing of good wine, and muscles adequately loose-tired from the rowing machine.