The leaves of the grandfatherly tree were frozen, and when the breeze seeped through them it was a crackle of dry and cold.  Elsewhere leaves famously rustle, but here they sometimes crackle.

Then it started to…I don’t know the word, I actually doubt English has the right word for it, I need one of those anecdotal Inuit languages with their 23 words for snow.  It wasn’t snow, nor was it hail.  It was salt crystals of dry frozen water that decorated my jacket and sat like sleeper cells in my hair, waiting for body heat to melt them into unexpected cranial kisses as I took my seat in class.

I stood out in the dry precipitant salting, smiling up into the tree, listening to its skittering giggles.  Winter may be a sever old man, but he can still sometimes giggle.  The Belgians waiting for their classes may have thought I was a tad touched in the head.

The Romanians walked up, sleep-deprived eyes burning even more intensely than usual.  He gets up at 4:30 AM to go to work at the construction site.  He sets his Coke down next to him, and sometimes when he goes to drink it, it is frozen.  He does not blink while telling me about never having time to do anything beyond work and sleep.

“Sometimes I am want to look at the TV, and I am there 10 minute only and you hear me…””  He makes a snoring gesture and sound.  I cannot quite remember what a snoring gesture looks like, but I understood it clearly at the time.

The cold is punches, and I fear the Romanian’s boss may soon hear what “all work and no play makes Traian a dull boy” sounds like in Romanian while axes chop down doors…but last night that cold gave me a gift.

I was riding home, cheekbones a broadening sting, nose (thankfully) not even communicating any more, and as an oncoming car drove by I made a screaming face at it.  And remembered!  That’s me!  I do things like that!  I sing to myself on crowded streets, and dance on street corners (if the song is good) to the confusion of commuting Berliners.  Oh yeah!

Lately the prospect of building a life overseas and otherlinguistically has seemed daunting and impossible, and it has squeezed me in a bit.  I started going to temp agencies yesterday and was nearly mute with shyness.  But Father Winter reminded me last night that some crazy lives in me, which makes everything so much better.

So when I went temp-agency-trawling today I was still blushing and sweating, sure, but not nearly as profusely as yesterday. 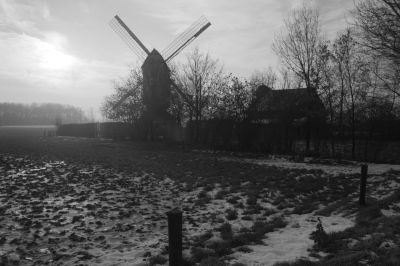