June 9, 2011
I’ve been talking Dutch classes in the mid-size town of Lier since January but tomorrow will be my last day.
Four times a week I get off the train, track two, walk down and under the tracks past the advertisements whose models scowl at me like I’ve just peed on their sandwich, then up the stairs past the vending machine of loaves of today’s fresh-baked bread, across the slanted parking slots of the bus station, each with a yellow plasticky pole bearing the route details. Around the corner past the little bakery selling the special Lier pastries (link?), sometimes the air is like living in a croissant, there is no more European feeling than that.

A few doors down is the deli with the dripping rotisserie chicken that will smell delicious later, but it’s still too early now, especially during the winter months when the sun was not yet up.  Then across the small bridge over the civilized wee river Nete, whose water is pure milk chocolate brown with wasted farmland soil all year round, and down the main shopping street of clothing stores with more irritated models taking themselves far too seriously, temp agencies with the same jobs posted in the window, a beautician school with never less than two would-be hairstylists smoking outside.
Along this street my regulars from the morning train peel off.  The middle-aged lady who looks kind of like a preoccupied poodle and has a surprisingly nice posterior turns left by the post office.  The guy I suspect is also an immigrant (one of these days I’ll say good morning to him in Spanish to test my theory) goes into the door across from the sandwich shop, though whether it’s work or home I can never tell.  The lady who one entire week in February wore two layers of skirts turns left at the H&M.  The stout gray-haired guy who looks like he’s walking twice as fast as anyone else yet stays right alongside us turns right after the store called “American Week” which has both the US and California flags hanging outside.
I am the only train passenger left when I pass the ice cream & waffle shop, whose smells will be in full saccharine bloom by my return trip, but there are town regulars too.  The stolid little babushka with the head scarf, I think she might look slightly happier when she has one of her two companion ladies with her, but it is impossible to tell.  She’s never made eye contact with me.  I’m guessing she’s either Romanian or Armenian.
There is the young mother pushing the stroller with the little girl who usually has a band-aid smack dab in the middle of her forehead.  The mother usually chewing her lip in some unknown and continuous angst, and has a blonde ponytail.  I would guess Ukraine for her.  She’s never made eye contact either.
The man with tired eyes and a sun-lined face is kind of a wild card, staggering slightly he sometimes passes me up by the station with a sandwich in his hand and mouth, and sometimes way down by the main square, bumming cigarettes off passerby or watching the ubiquitous roadwork crews.  He wears a slightly threadbare suit, dark, slightly too large for him, like it was made for him when he was younger and fuller, and he can’t bear to give it up.  I’d bet on Turkey for him.
I cross the grote markt (“big market”) square, past the city hall, often just as the nine o’clock bells are ringing in what used to sound horrible but has grown on me.  During the 18th century, there was a tax on curtains, so the long windows spanning several storeys are divided into panes roughly the size of your hand, roughly four thousand of them. 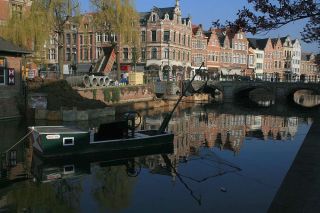 Another corner, past a children’s clothing store that for a while had a handmade sign on butcher paper in the window for “pimped cupcakes.”  Across another branch of the Nete, where work crews have been working since February on a new water main and a little terrazzo on the river, which I’m sure they were hoping to have ready in time for the good weather, but it’s still water pumps, mud, and sheets of metal laid over trenches.  Last week I politely and respectfully followed a granny’s cautious pace through this area, then when it was normal streets again passed her just as she hawked out a giant loogey into the gutter.  Grandma!
Then it’s down past the closed bar with the broken windows, and around the European-sized 14th century gothic Church of Saint Gummarus, who, according to Wikipedia, is basically a saint because his wife was a total bitch.  (He went away to war, she stayed home and terrorized the servants, he came home and tried to make everyone happy, failed, they separated, he became a hermit.  No kids out of that one, but he did get a giant church to the patron saint of henpecked husbands.)
Around there somewhere I pass the one regular who I suspect is actually Belgian, and who is also the friendliest, a middle aged professional lady with blue eyes and gray hair.  After passing each other around the same spot for about four months we have begun smiling and saying “goede morgen” to each other, her voice is higher pitched than I expected.

Around one more corner and up a stubby street, also torn up for months by a municipal project of undetectable purpose, then across the brick courtyard of the school, dead grass that tried semi-successfully to grow up through the grout, faded lines of an ancient soccer field still visible in chipped white paint.  You have to pay attention when walking over the volcanic dips and rises of the buckled surface, a soccer game would be impossible.
So I’ll take that walk one more time, each way.  Goodbye fantastic assembly of classmates, tot ziens Lier.

← Welcome to the world, little one.
What my teachers taught me →