April 25, 2012
Good news: I made it to Costa Rica yesterday, having no problems at the infamous border with Nicaragua. I was the only whitey in the normal lines, but saved beaucoup bucks over the alternative method of taking the tourist bus, which processes passports all together, and got to chat about pork tacos with a Nicaraguan abuelita en route. I think the crucial moment was when the border agent sized me up with a good long look, then said the exit tax was 45 US dollars…paused…and as my reaction of disbelief started, corrected himself “I mean, cordoba.” (45 Cordoba = less than $2.)
Good news: I found my desired hotel in Liberia without getting lost, and the town already feels refreshing.
Good news: They have a dorm, and there’s no one else in it. 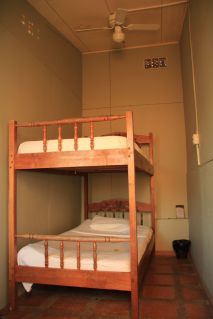 News: This is the dorm.
Good news: It’s clean, no bed bugs in the thin mattress.
Good news: There’s wifi so I can catch up on this whole internet thing which has been getting away from me. (Has it really only been a few days? I feel a fond distaste for my internet addiction.)
Bad news: none.

And another list, inspired by my favorite blogger who is excellent in English, no matter what she says.

First impressions of Costa Rica:
-The locals are super friendly and helpful, except the hotel manager, who has probably just had his life’s fill of stinky backpackers like me, and even he does perfectly fine in his stern way.
-Lots of cops wandering around, which I guess ads to the safe feeling.
-I have trouble believing it is always this windy…the sheet metal roof seems close to Wizard-of-Oz-ing off into the sunset.
-Maybe it’s a combination of the dry season and wind, but the mosquito level was deliciously low last night.

-Good food. I enjoyed my first “Plato del dia” of black beans, rice, potato something salad, shredded lettuce, a couple slices of sweet plantain, a tough slice of steak that scorned my initial attempts with the dull knife, but capitulated in the end, and a fresh-made tamarind soda, all for $5. Then improved by the spicy onion & chili mixture spooned out of the jar that sits on every table, with mismatched rusty lids.
-Kinda glad I got my tetanus shot recently.
-Interesting cultural blend. During the meal I felt like I was on a bit of an acid trip due to the Smurfs speaking Spanish on the TV across the room. That show is friggin weird, man.
-Good travelers. I ended up with a roommate after all, a super amiable Australian lad whose name I never did learn, but whose conversation was a delight. And he didn’t mind that the sauce from my breakfast of juevos rancheros splashed onto his napkin. (The tortilla was fried into an utterly uncuttable flying saucer, and my attempts at folding it into submission were messy. I ended up going Nepali on its ass and using my fingers, which was effective, albeit messy.)

← Laundry first, then a siesta. Sound good?
A quick game of catch-up… →