To say the streets of Villa de Leyva are cobblestone would be like saying Bogota has traffic; sure it’s true, but the level of understatement is unacceptable.

Antwerp has cobblestone streets, regular shapes that sound rhythmic under the tires of passing luxury sedans, and look like fish scales on rainy days. Villa de Leyva’s streets look more like riverbeds than fish scales, each stone a different size, shape, and personality. There is no rhythmic sound of passing cars, perhaps because the town’s speed limit is a crawling 5 kilometers per hour. 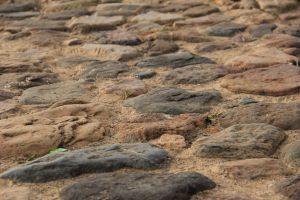 5 kilometers per hour! We would walk faster than that, except the stones are uneven enough that walking to the store is a 10 minute game of Try-Not-To-Break-Your-Ankle, so we all go 5 kph, staring at our feet, the cars just big lugs going with the flow of traffic, like cows in Nepal.

I suspect this mandate for a leisurely pace is a significant factor in the towns impressive ability to be sleepy and relaxed, even with 400 years of history and enough tourism sex appeal to build a ring of chic hotels around the town. God bless the Low Season though, because we have seen only a few other whiteys; I suspect most of the tourists here are Colombian.

My skin thinks it’s in a Goldilocks story, Cartagena was too hot, Bogota too cold, but Villa de Leyva is juuust right.

I’m spoiled on gorgeous windows after Cartagena, but I still can’t walk more than a block without staring at someone‘s wall; thank goodness the shutters are always closed or I might find myself with some explaining to do.

There are old women walking around in awesome hats, very similar to the iconic bowler hats of Bolivia, some serious indigenous highland style with weathered cheeks and wise eyes.

I was already falling in love with the town within an hour of arrival, despite the hunger in my belly, but when the waitress set down my bowl of “ajiaco con pollo” I was ready to propose marriage. A regional specialty, ajiaco is a thick chicken soup with potatoes and some sort of spinach-like herb, served with rice, avocado, thick corn, sour cream, and capers.

(The corn is thick and meaty, totally unlike our flaccid kernels. It’s like Botero’s version of corn.)

A couple seconds after it arrived I realized I should take a picture. Um…sorry. I’ll try again tomorrow. Eagerly.

← Bogota, reunion, and departure.
Today’s walk to the thermal pools. →