“It’s a pretty easy place to get lost…I don’t think there are any signs…there’s not really a path…what little path there was got pretty washed out last winter…there’s a bridge, but it’s missing some pieces…” With a description like that is it any wonder K and I set out this morning to discover the forgotten valley southwest of Villa de Leyva? But it was also described as a magical place with great energy and ancient paintings on the rock walls.

(They’re not sure how old they are, but pertain to either the Arawak or Chibchas civilizations, both of which are pre-Colombian and date to the 4th century AD.) (And the Arawak language gave us the word barbecue which is pretty awesome, cuz them hillbillies ain’t got no idea they speakin’ Arawakese.)

We walked along the same road we took to the aguas termales, marveling at how much shorter a distance is when you know where you’re going, and stopping to buy a pair of fresh peaches from a pair of brothers selling them out of the back of a pickup truck.

We passed the hot springs and headed uphill to the toll booth, where we asked if anyone knew how to get to the paintings. No one did, and they looked at us with baffled concern as we set off walking up the narrow winding highway, semi trucks groaning past an arm’s reach away, munching our peaches happily. Buenos dias!

We reached the top of the slope and were delighted to see a battered and bent sign for the paintings on a pole twisted nearly down to the ground. We left the highway and found the entrance to the valley, beginning our descent past a few silent houses. We passed the third and last motionless house to find that not all inhabitants of the valley are so peaceful.

Dogs, man. Frickin dogs. This one fella was not happy to see us. At all. I think we may have startled him, and he showed his ire with barks, growls, raised hackles and gnashing fangs. There are no pictures of him because my hands were busy picking up rocks to throw at him if necessary.

Luckily it didn’t get that far, and we left the nasty little bastard behind us as we continued into the valley.

We found the bridge, which was indeed missing the guard rails and several planks, though some had been replaced by rough-sawn chunks of wood. What was left was hardly confidence inspiring but we made it across without any broken limbs or action movie moments.

On the other side the path continued through lush green grass between the sere cactus hills. What looked like cows were grazing along the path, but we couldn’t help but notice their rather impressive balls hanging down. Hello…oxen? Surely no one leaves their bulls out to wander around? Sometimes I realize what a city boy I really am, despite my best intentions.

Walking through the valley was a pleasure, and TV-Liaison Lady was right, it is a special place. Villa de Leyva is hardly a metropolitan spot, but THIS felt relaxed. It was a whole new side of Colombia we hadn’t seen yet, and I am immensely thankful that we had the chance.

Not long later we noticed a rock wall piled under an overhang; we had found the paintings. It never ceases to amaze me when you arrive at what could be a significant tourist site and there is basically nothing there. No ropes, no cameras, no security guards, not even any other people. Just a couple more cowbulloxen who were barely interested in us, much less the centuries-old artwork on the rock above their heads.

Again Liaison Lady was right, there was a special energy here, probably because there was no one else around. You could stand under the massive shelf of brittle rock overhead and imagine camping here centuries ago, a normal person just like you (only without the Ipod) making a fire against the stone and painting faces, figures, and designs on the rock overhead. Was it religious or were they just waiting for the rain to stop? 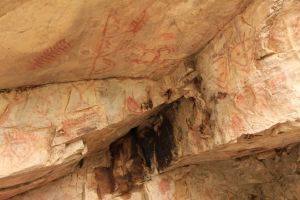 We stood and marveled for awhile, then started the long walk back, filling out pockets with stones of varies sizes in case the asshole dog was still there. We approached the place we’d seen him before…then his house…then we were in his yard when I suddenly heard…nothing. Our quick steps took us past, and with relief and smiles we began dropping our arsenals.

and flying across a stream. Ole!

Back up onto the highway, where we immediately got a priceless look from a passing motorist of “Who the…? What the…? How the…? Where the hell did they come from?!?” The whole day was perfect weather, overcast to protect from sunburn but nice and warm, occasional short bursts of light rain to tickle the skin.

I enjoyed the use of my new hat (I’m kinda in love with it) and we bought two more peaches from the brothers with the overflowing truck, then we were back, perfectly tired, digging into a replenishing meal with a perfect glass of red wine.

Gotta say it was a good day.

4 thoughts on “Pre-Colombian petroglyphs in Sachica”