As I sat down to another breakfast of runny eggs and unbearably white bread (it’s really more like a cake of pure flour than bread…have I said that here before?) I said to K “we really need to find out what the locals eat.” If you order a European-style breakfast when you’re not in a European-style area…don’t expect it to be what you are familiar with. Makes sense, no?

So when I saw something called “changua” on the breakfast menu in Villa de Leyva I was ready to order it. Then I read the description, “a broth of milk, water, and egg” and my enthusiasm took a hit. Am I the only one who thinks that sounds fairly disgusting? I confess, I chickened out and went for the eggs and whiiiiite bread again.

But the next day! Dangit I was gonna eat changua! Or drink it. Or slurp it. Or whatever verb best described the consumption thereof.

8:00 the next morning we stomped back to the changua place. They don’t open until 10:00. Dang. We stomped off to somewhere else but they didn’t have it and we were getting cranky (you know how it is).

10:00 the next morning we stomped back to the changua place. They were open! Sat down. The clay-faced waitress came up and informed us that there was no service as the cook hadn’t shown up yet. We gave her half an hour then stomped off somewhere else…and found changua!

I ordered the complete “desayuno boyacense” breakfast (Boyaca is this department of Colombia), which had a type of local bread, coffee, and fresh juice in addition to the broth I was looking for. After all, how filling can broth really be? (I needed something hearty for our planned walk to the rock paintings.)

Then it arrived. A large charcoal-colored stone bowl filled with bubbling milky liquid in a marshland of soggy bread. It smelled a bit like hot wet laundry. Sheets and towels day. I let the temperature drop below boiling then started exploring the depths to find masses of white stuff in a variety of textures. Some were boiled egg, some were the Colombian white cheese that resembles mozzarella, and a lot of it was the soggy white bread (cut from a loaf, no Bimbo, thank God). 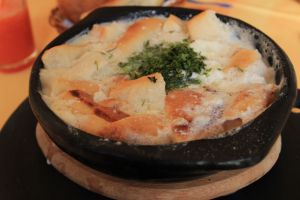 I would dunk the spoon into the white abyss, give a little cutting and scooping motion and lift it to see what I had caught. Then eat it to figure out what it was. That local cheese is the best I’ve found in Latin America. It makes me want to make enchiladas. And the gray stone bowls alone are a joy, and it turns out they are common in Colombia (we had them again tonight in the Mongolian place in Bogota).

I gotta say, I enjoyed my changua. It was interesting. It was…hearty. (I didn’t need the other parts of the breakfast, but I appreciated their presence for the variety of taste and consistency.) I am glad I tried it, and recommend you do too if given the chance, but I don’t think I’ll need to order it again any time soon.

In fact, I think I’ll stick to fruit salads for awhile.

← Saturday market in Villa de Leyva
This blog is making me hungry. →

One thought on “Changua is chevere.”