From colonial mansions to vomitous toilets.

We ended up spending the better part of two different weeks in Bogota, but kept busy walking, taking pictures, eating, and switching hostels every day or two in a compensatory form of interior vagabondery.

For K’s first day in South America we stayed in the luxurious Casa Platypus, a restored colonial piece of awesomeness with creaky wooden floors (in a good way), impressive water temperature and pressure in the stone-floored showers, and attention to detail unmatched by any hostel. Rolled and soft towels on the bed. Nice blankets that don’t smell as funky as the last 37 backpackers to use them. Complimentary soap and shampoo and a TV which we even considered watching. Bedside tables on BOTH sides of the bed, which is more important than you think. And a better breakfast of eggs, cereal, fresh fruit, and hot beverage.

We met an Austrian couple on their honeymoon, a French professor with permanent scuba-mask marks on his forehead, and an American expat who wasn’t actually staying there, but haunted the place trying to sell English lessons to the staff of young women…(and yes, that ellipsis means I think he was looking for more than pupils…)

It is prohibited the psychoactive-substance use in the hostel.

Casa Platypus was impressive in all respects, including the price, so on Day 2 we switched to Hostal Explora. It’s more like a Hosteling International place, with coldly clean rooms that feel a bit like human storage. The common room is a chilly rear patio enclosed by cold brick walls and covered by a tarp…and it’s cold. The hallways are bare of decoration…and cold. The showers have warm water…but the bathrooms are cold.

Can you tell my main problem? But it’s a new hostel, just beginning under the efforts of a consortium of friends, and they have good plans to improve it, so by the time you get here it could very well be warmer. But for now staying there requires a nearly continuous flow of hot tea. 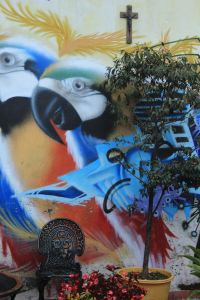 We didn’t meet anyone in Explora, so moved to Hostel Sue, despite how weird of a name that is in a Spanish-speaking country. It was a good mid-line of fiesta, not so body-odorous as some (like the famous Cranky Croc) but much more conversation than our day at Explora.

I suspect Sue has a deal with a local Spanish school, as there seemed to be a lot of studying going on during the day, and studying-abroad-type partying at night. The staff barbecued rows of juicy sausages and grilled plantains by the tray, which we peeked at enviously over our bowls of fairly bland spaghetti, not knowing how to get included in the flavor options.

Hostel Sue was pretty mid-level for parties in that most of it moved out to the “party bus” around 11:00 so us old people got to sleep at a good hour, but we did have the familiar pleasure of a morning trip to a bathroom splashed with vomitous liquids, cigarette butts in the sink, and…do you really need a third item? 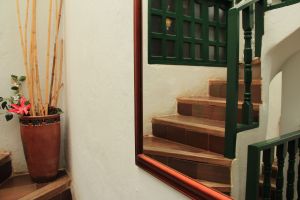 We were on the third floor in Hostel Parque Narino

Then it was a week in Villa de Leyva where Hostel Parque Narino felt more like a family home (in a good way) with a Colombian aunt and gay Colombian uncle, with their inexplicable two year old daughter who was precious to the very edge of overkill. (Little creature knows how to work the impish smiles…be careful of that one.)

We had one night in a budget hotel whose only memorable feature was the open floor space where we finally had our first morning yoga session. That was a day with good chi, lemme tell ya. 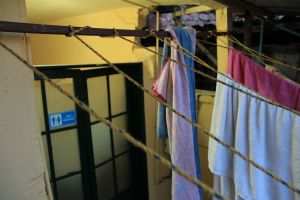 Hostal Platypus had some good laundry facilities, but it wouldn’t stop raining.

Back in Bogota we went to Hostel Platypus, where I meant to go the first time. We were in a quiet second building up the street which had typical hostel bathrooms of wet floors, hairballs in the shower, and a toilet that doesn’t really flush so much as just make lots of noise. The room was large, though retained an odor sharp enough for even me to detect, and I am traveler-blessed with a surprisingly dull sense of smell. (Poor K is cursed with a remarkably sharp olfactory sense. Good for gardens, bad for traveling.)

The wireless internet didn’t work though, which was a disappointingly big problem for us, so we went looking for another one, stopping for breakfast on the way. Turns out the breakfast place has a hostel upstairs, which was clearly aiming to be a home-away-from-home type place, and succeeding heavily…but not necessarily in a good way.

The place had an overriding sense of closeness, as in the staff is all up in your biznis the whole time, asking how you are and where you’ve been every time you come in the door, frequently stopping by to see if you need anything and give you recommendations about what to do (which you then feel semi-obligated to actually do), and generally making you feel like you’re back in high school and your parents suspect you are lacking in motivation, and are perhaps even doing the marijuana.

The hostel mom puttered around saying things like “have you seen my glasses? I just can’t see anything without my glasses. Have you seen them?”

Plus the walls were paper thin, such that we could hear the neighbors’ every word, shift, and fart, and the bathrooms were communal by gender, so there were people wandering around on the other side of the half-wall while you’re showering or on the toilet.

The peak for me though was the breakfast. It was a decent Colombian hostel breakfast, with eggs and coffee or chocolate, which was fine the first morning, but for the second we wanted something else so went out. When we got back the little hostel mom gave us a hurt look that we’d gone elsewhere for breakfast. A guilt trip! From the hostel staff for eating breakfast somewhere else! That kind of cracked me up while simultaneously making me want to pull out my hair.

We looked at a couple more, one with two available rooms, the front of which was no good for K since it was right next to a bus-busy street, and the rear of which was no good for me since it had no window. The next was nearly good enough despite the lingering cigarette smell in the kitchen and common room (“we’ll just stay outside or in the room”) and the slightly sex-tourist room décor (think geisha posters and pink lighting) but then the manager hit on K. No thanks.

So we came back to the clean and stable ice hostel at Explora. I drink so much tea here I need to pee every 15 minutes. In fact, my bladder just notified me that this blog is finished. Adios!

← Walking, eating, and not getting shot in Bogota.
A mountain and/of my socio-religious opinions. →

One thought on “From colonial mansions to vomitous toilets.”