Maybe a sacrilege of wealth. Maybe a miracle of blood.

Ecuador’s coastline is punctuated by giant ridges of stone that jut into the sea, leaving long stretches of sandy beach borded on each side by steep cliffs, like lines on a geological measuring stick of Beauty. One of these extends just north of Montanita, with Olon on the other side, and as we rode past I noticed a chapel of some kind perched on top. A faded poster on the chipped wall of the hotel labelled it El Santuario de Olon, so on the afternoon of our day in town we walked up there.

We started on the sand, assuming there’d be a path from the beach up to the Sanctuary, but as we got close it seemed the wealthy have bought up every foot of beachfront property, and there was no gap between their mansions. Luckily actually building the mansion seems to be the hard part, so we crossed a barbed-wire fence and cut through one of the half-built ego-cases. (Meanwhile the town next door doesn’t have a hospital, garbage rots on the streets and beaches, and the school was as cinder-block bare as I expected.) 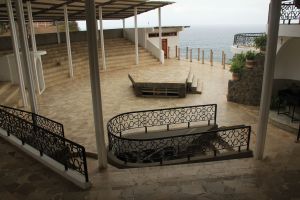 As I may have mentioned, I find a tidepool, a tree, the moon, any of these to be holier than most churches, but the Santuario was impressive (and there was no one else there).

A lot of marble without being pretentious, simple wood pews, and everywhere everywhere, the sound of wind and wave. It was more like a chapel to the Sea than anything else in my eyes, the tortured man on the cross notwithstanding.

The Sanctuary is shaped like a ship, with the main chapel area on what would be the bow, and a second curved area of seating at the stern that looked well suited for personal reflection, gazing out to sea. Not bad, Catholics, not bad.

Inside the hull was a small grotto room, still reached by wind carrying the sound of surf, in which stood a statue of Maria Rosa Mystica. Please correct me if I’m wrong, but the spare signage in the chapel (and some googling) indicate she is the version of the Virgin Mary who began appearing 1947 in order to urge some reform on the church, and to remind the faithful of her priorities. 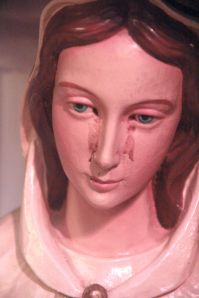 She has appeared many times over the years, although since seven appearances in 1947, she seems to manifest only through her statues, which then cry, sometimes tears, but usually blood. The one in Olon apparently wept blood for several hours in 1990.