Our last night in Ecuador we went to the only restaurant we knew in Guayaquil, the cheap Chinese food place across from the open-late liquor store where seen-it-all attendents passed groceries out to nervous looking customers through the bars.

We ate chop suey and watched a super-gory movie about a group of teens staying in a snow lodge getting bloodily murdered by frozen Nazi zombies. Awesome (especially the peculiar dubbing), but faintly nauseating with a plate full of cheap chop suey and a belly garnished with pre-trip nerves.

Yes, after 4 years of nearly continuous traveling, I still get nervous when I move from one chapter to another. I was going from a Backpacking Chapter to a Stationary Chapter that would resemble work in some ways, staying with friends in Curacao for a couple months. But I woke up excited when the alarm went off at 3:30 AM.

We packed, ate our leftover fruit, and went downstairs to catch the taxi we’d scheduled for 4:00. We found the lobby empty, dark, and quadruple-locked: heavy lock on the door, secondary pad lock, floor bar, and security gate. There was no way we were getting out without help. 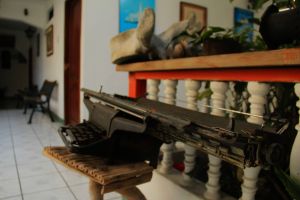 I was too sleepy to take a picture of the locks, so here’s a weird typewriter.

We of course had no idea where “help” could be found, so I wandered the closest hallway, shout-whispering “hola?” at a level intended to awaken but not disturb. It’s a fine line to tread.

I apparently tread it well enough, as a sleepy senora stuck her head out, complete with hair curlers and flower robe. All she was missing was the green face mask to qualify for an Eddie Murphy movie.

She opened the door just as our disconcertingly sleepy cabbie appeared. He dropped us off at the airport with a yawn, an hour in an amazingly slow moving line, and we were on our way towards the Caribbean with a stop in Bogota to watch the middle-aged Colombianas prowl the terminal hallways in skin-tight silk body suits. Leopard print of course. With heels. And attitude.

Our second flight wasn’t long enough to watch a movie, so I didn’t quite get my US blockbuster fix (what happens in the Avengers movie after he turns into the Hulk?) but dissatisfaction could never survive that first breath of humid Caribbean air. Take a deep breath.