Drag queens of the sea make me feel welcome.

Our temporary home is a U-shaped complex of apartments around a pool, complete with several palm trees, and a small private beach. Pelicans and frigate birds fly overhead, and an utterly badass eagle of some kind just moved into the neighborhood, making all the wee birdies terribly nervous.

It’s incredibly beautiful, but it pales in comparison to what’s just offshore.

There is a low curving breakwater of volcanic stone over which purple crabs promenade and preen, tucking their shells just right so the occasional wave slides right over them. The other side extends into and under the sea, providing habitat for an aquarium’s wet dream of fish.

I breaststroke unrepentantly with angelfish, butterflyfish, and damselfish. Stoplight parrotfish are an art gallery by themselves, armored silver patterns over red bellies in their youth, and growing into adults so flourescently bodacious only a child or Nature could come up with it.

I love the trumpetfish, hanging vertically in the water, still and oddly seductive, and am intrigued by the peculiar almost prismatic bodies of the smooth trunkfish.

The oddly shaped filefish, decorated with short lines that look like they’d glow in the dark seem like they know a secret. Fat porcupinefish mope around the bottom, and I’m pretty sure some of those curious little red ones that peek up at me are squirrelfish. They watch me so intently I can’t help but feel they like me. 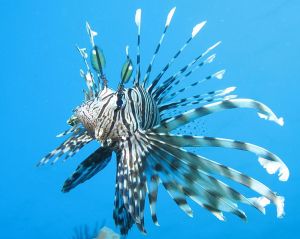 There are usually a few of the spectacular but invasive lionfish, drifting like a gorgeous infection in delicate ferocity and calm menace among the rocks. (Our are usually bluish, maybe pterois miles.)

With their elaborate feathery spines they are too fabulous to be anything but the drag queens of the sea, but strong currents give them bad hair days to a comic and pity-inspiring extent as their venemous spines swing wildly in the water.

They eat local fish, have no predators, and breed monthly, such that just to keep the population from growing you’d have to kill 27% of them every month. Superhero biologists (the best kind) in Honduras are trying to train sharks to eat them, which is just plain rad, but since they’re edible for humans, if you ever see them on the menu, go for it. 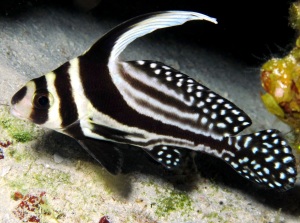 Schools of grunts look like the yellow paint can exploded, and don’t forget the spotted drums, gobies, blennies, and puddingwives, and of course the slippery dicks, can’t forget them.There was an unflinching eye on what looked like a huge barracuda yesterday, but kind of leopard-spotted. A meter long and as thick as my leg, it hung motionless in the water, what big teeth you have, Grandma.

And last week, just for a moment, there were a dozen dolphins moving with ethereal grace through the same space where I swim, though my corporeal form was unfortunately limited to a chair at the time.

Curacao could actually learn a lot from its fish, who often move in large schools of at least half a dozen species intermixed. Their colors are to Brazilian carnaval as carnaval is to a fog bank, and they mingle utterly without prejudice as they feast in clearly audible crunchy-crackly satisfaction on the coral and algae.

We’ve met nearly no humans on the island, but the fish are damn welcoming.

I bet I could sneak in a quick swim before dinner…

← Dying through every pore.
Gringo Radio →

2 thoughts on “Drag queens of the sea make me feel welcome.”