We departed Curacao, ready to move on but not wanting to leave. With excitement for the future and reluctance to leave the past, we focused on the present, absorbed in the parallel universe of air travel.

Food meant peanut butter and jelly sandwiches we brought with us, eaten at the zinc tables of the airport’s Juan Valdez Cafe. Going to the bathroom meant stepping around the “cuidado, piso mojado” sign and being surrounded by peeing strangers, their belches and odors. Opening overhead compartments meant exercising caution, as contents may have shifted during flight.

One leg at a time, we soon forgot that there was life outside of airports, security screenings, and seats 11A/11B. Please have your boarding passes ready.

But now the horizon holds something other than a line of clouds and a titanium wing; I am again Ecuadorian. I speak Spanish here, and feel unsure when people express something in ways other than I expect them to. I find myself frequently wanting to say “sorry, but all that jibber jabber means ‘yes’, right?” Particularly on the phone. I’ve never liked those things.

We used to spend old Dutch money in Curacao, now we spend old American money in Ecuador. Colonialism and imperialism, old and new. We used to drink water from the tap, now we spit meticulously after brushing our teeth with it. We used to walk down cracked sidewalks past rotting garbage…well, we still do that, although now there are no lizards in it. 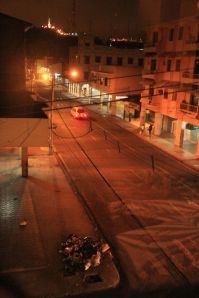 3:30 AM view upon arrival in Guayaquil. (The garbage truck comes daily.)

Lizards are great controls on the cockroach population apparently.

On the island a couple people knew our names, but here no one does. But the average stranger there ranged from brusque to hostile, while Ecuadorians, if anything, are even nicer this time than they were before.

We wanted to hug the cooks at yesterday’s breakfast cafeteria, want to adopt the hotel staff here, and when I tried to return this piece of shit computer yesterday the salesman seemed genuinely sorry that he couldn’t do it, and helped us submit the required online complaint on his computer. (Think HP will honor its guarantee? We’ll see.)

We miss Curacao, its friends, yoga classes, and seaaa breeezes. And we love Ecuador, its frenetic streets, easy temperatures, and welcoming openness.

Missing the past, but happy with the present. One side of the coin is a Dutch queen, the other an American president, but they both come up heads, we win.

← Dang pirates always confiscate my balls.
A Home for Everyone. Part 1. →

2 thoughts on “Contrary, concurrent, and compatible.”