A Home for Everyone. Part 2. 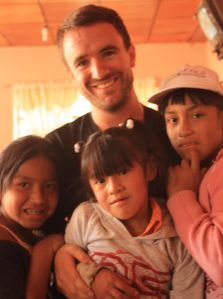 After my lack of success at feeding little Mateo, I wasn’t sure what to do next…until the door slapped open with an explosive expulsion of tiny people, arms immediately going around K’s and my waists, faces peering up at us with smiles and questions.

I am Michi. I am Leonela. I am Antonio. I am Anita.

My name does not translate easily into Spanish, so somehow they took to calling me “Javier Loco.” Crazy Javier. I can live with that. 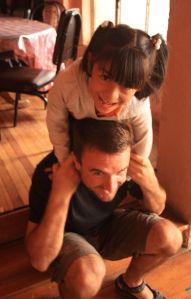 The self-conscious awkwardness of our first hour was over, swept away by enthusiasm and exuberance. They hung from my arms, rode on my shoulders, and clung like giant shoes to my feet. I called them sacks of apples, threw them over my shoulder, and delivered them to each other. We giggled for the next eight hours…then looked at the clock to find it was actually about 2 hours.

How do people do this? Having 3 children on my shoulders was fun, and that giggling in your ears is a sublime soundtrack, but (as K has inexplicably started saying) we were knackered!

We took a break in town, ate tamales in someone’s garage-restaurant and drank “tree tomato” smoothies. In the chaotic market, where indigena women in bowler hats sold exotic fruit and stern men parcelled out bleeding hunks of animals, we bought three dozen tangerines and a pair of plastic soccer balls, one yellow, one red.

Back at the orphanage a couple hands went for the fruit in my left hand, but every eye went to the ball in my right. An hour later it came back, split in half, while the other ball miraculously survived the day, though I doubted it’d see a second sunset. I tried not to think of the proper ball we’d lost in transit…

K’s hair was a hit, as always.

The balls were a big hit, but these kids don’t need much to have fun. A sheet of imitation lego broken into three pieces served as cell phone, steering wheel, and plane ticket when we “flew” to France. Handfulls of grass bought the tickets, and everyone looked out the window at the giant birds, hoping as I did that they didn’t eat planes for lunch.

Throughout the afternoon they took turns disappearing for their baths, returning in pajamas with wet hair to play in the dirt some more before dinner.

There was A, whose behavior problems are occassionally a threat to the harmony of the orphanage. B was addicted to pinching and pulling my leg hair with a mischevious grin (I can’t blame her, she has probably never seen a monkey like me) and C who had a penchant for climbing as high as he could on the furniture and jumping off. D got attention by crying, and E took great care of him.

We called F “cookie monster” after she spent the afternoon chewing on the corner of the plastic bag holding her mashed-up cookies, most of which spilled out the open top.

We had to give the little imp a nickname as we narrated for each other her capricious swings from sweet-faced innocence to flying-fisted devilry. “Did you see what cookie monster just did?”

Little girls ranging from 4 to 6ish, G, H, I, and J were absolute angels.

G’s mouth shows the marks of major reconstructive surgery, probably a cleft palate, but her smile is pure exuberance, a gift no less precious for its frequency.

J rode around for a solid hour on my shoulders, giggling and participating in whatever game I suggested, and at one point chewing on my hair with a placid expression on her face while she grazed that made K laugh out loud, while I entreated her not to go back for seconds.

We slept that night under a Looney Tunes blanket, my head on a Tweetie Bird pillow, and woke to the sound of clamoring little voices and running feet downstairs…