Istanbul makes a man out of me

It was K who noticed the barber shop. “Did you want a haircut?” 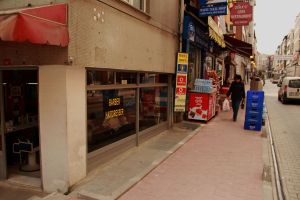 My head felt like a chia pet left untended somewhere with plenty of water and sunlight, and it was speeding through my supply of tiny bottles of hotel shampoo. I would have gotten it cut in Belgium, but I suspected a Turkish haircut might be interesting.

A not-tall man with short gray hair was reading the paper when I opened the door, and gestured me to a seat. He spoke no English, and I can only say “thank you” in Turkish, but my gestures and shoulder shrug of “something like that” were met with a nod of understanding.

He started with the buzzer, which seemed to have a hard time with my long hair. One spot in particular was giving him trouble, and he went over it again and again, slowly, until I looked in the mirror and saw he was watching the TV in the corner, where overly emotive sighs and gasps sounded like an adult movie. 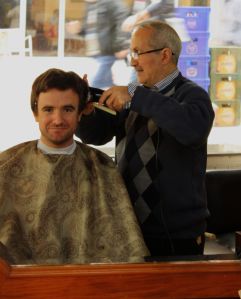 It wasn’t the first time a barber has gotten sucked into a soap opera while cutting my hair, but as long as he wasn’t holding anything sharp, I didn’t mind.

After the buzzer came the scissors, and soon I felt ready to go. But we weren’t done.

He asked something in Turkish, and I agreed. Why not? He pulled me forward and pushed my head into the sink, and I retroactively heard the word “shampoo” in his question. Shampoo what is 97% buzzcut? Oh well.

It was the first time someone else has washed my hair since Jennifer, the Elizabeth Shue lookalike who was the object of one of my 6,000 Middle School crushes. It was kind of nice, actually.

Another old Turkish man had come in by the time the barber was toweling my head dry, and for some reason, there under the towel, I got the giggles. I tried to stifle it before either man noticed, or the concealing towel was removed.

“Why is he giggling?”
“I don’t know. I do nothing. I just wash his hair.”
“Foreigners are very strange people.”

Thank you to K for the pictures

Luckily I was composed in time, because we still weren’t done. Next was a warm-foam shave with one of those little brushes and a straight razor. A friend once recommended I have this done in New York, saying it would make me feel like a million bucks. I should have taken his advice. There is something relaxing in a uniquely manly way about having another man scrape your face and throat with a razor blade.

We still weren’t done. Next: aftershave. The kid in Home Alone was overreacting, but I see his point.

Still not done. A cotton swab swished around in my ear, then out came the cigarette lighter. I have the fuzzy ears of an 80 year old man, but Turkish Barber was going to help me. With artistic brushes of flame, he singed those bad boys right off.

Almost done. Just a few puffs of cologne across my chest, and I was ready, emerging onto the Istanbul street a new man.

7 thoughts on “Istanbul makes a man out of me”