Since saying goodbye to K in Istanbul, I have had precisely one time/town where I talked to other tourists to the point of getting their names, which is good because other than that, Kuşadasi blew.

But I have no problem making best friends among the local dudes. In the bizarrely large Diyarbakir bus station it was Chato, the nickname his English-speaking customers in the restaurant in Izmir had given him

On the bus ride to Mardin I tried dutifully to pay attention to the countryside, but it wasn’t that different from parts of California, or perhaps Spain, and I nodded off. I woke to see a warm brown city on the slopes of a large hill ahead. Mardin.

I looked over to Chato, and he answered my smile with one of his own.

“Tim, where you want hotel? How much you want pay? Hotel here…very expensive.” He pointed up. “Up top, cheaper, better for you, I think.” Oh Chato, you know just what to say to a fella! “You get off here, take blue bus, it take you up, tell man you go ‘Mardin Müzesi’ and he take you. Goodbye my friend.”

I found a room that looked more like a stone monk’s cell from the 13th century, windowless and cool, which is awesome if you think about it in the right way, and the price was about 1/3 of what I’d been led to expect from this town.

Then it was time to see it.

There were two images that stuck in my mind’s eye like sand on a Mesopotamian wind. The first was the ancient buildings of Mardin climbing their hill, and the second was the Syrian Plain stretching off to the horizon below. 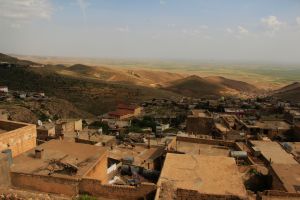 And there it was. Greener than I expected, but inexorably giving way to the dry brown of the approaching summer, everything motionless from this distance, but with a sweltering presence of ancient history and modern violence. I barely noticed when the waiter set my çai in front of me.

Once I got my breath back, I set out to explore…

← So pleasant in fact, I’ll drink the yogurty salt-water
So nasty. So beautiful. Hasankeyf Part 1 →