An evening in Tel Aviv, with Elvis, loneliness, protest, and the Beatles.

Tel Aviv is the most unfriendly city of this trip so far, and also where I had the best friendships. Go figure.

It’s a place well suited to contradiction, where worshipers of three faiths that each teach peace and love have been killing each other for millenia. “All the world’s a paradox, and each must play a part.” Is that how the quote goes? 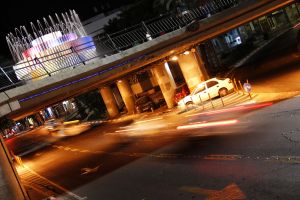 Traffic under Dizengoff Square, the fountain on top.

When I came to Tel Aviv I had two friends in the city. This quickly became three, then five, before reaching…hard to count exactly…I’d say nine by the time I left yesterday. But locals have their own lives and visitors have other places to visit, so nine dwindled until I said farewell to the French, and found myself alone again.

There’s not much to do at that point but walk.

I got a slice of overpriced pizza and followed my feet to a man playing a peculiar modern violin, his music sweet, slow, and just a bit sad. It was exactly what I wanted, and my spirit smiled in gratitude as I weighed out a hefty tip in my pocket. 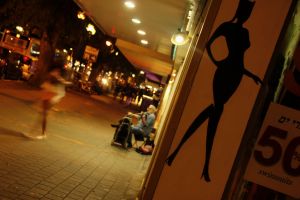 The violinist, moments before he took objection to this photo.

But first I took a picture of the scene, then watched as he stopped playing, put away his instrument, and marched up to me. I was about to thank him for his music when he started ripping into me in angry Hebrew.

I don’t speak the language, but he clearly had a number of things to say about my conduct, character, and probably ancestry. He chewed me out for awhile, even after I had made a gesture of apology and put away my camera.

I definitely respect an individual’s personal space, but if you object so vehemently to being seen, perhaps you should consider a career other than street musician playing an interesting instrument on a pedestrian-friendly street on a balmy Saturday evening? 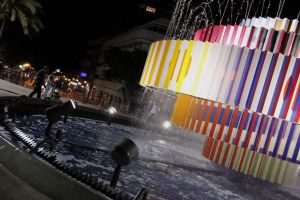 The Fire and Water Fountain

I think this man enjoys conflict…

I kept walking and reached the Fire and Water Fountain in Dizengoff Square. It wasn’t working the first four times I walked past, but now it was, turning slowly, displaying different colors and water jets. I took a picture for an older couple who smiled toothily and thanked me profusely. I love them a little bit.

I continued on my way, and found a protest beginning in Habima Square, where the city’s concert hall overlooks a small, tidy, and colorful sunken garden area where people sit to chat. Normally a sunken place like that would quickly become the territory of “undesirables” but I saw no sign of that here. 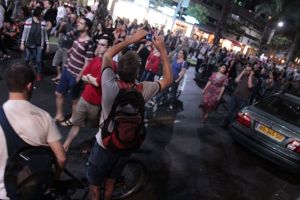 I went with the march (against a rhetorically populist politician’s selfish opulence as I understand it) for awhile, playing at undercover journalism until my feet and eyelids formed a coalition to remind me that I hadn’t slept nearly as much as I’d walked over the past few days. 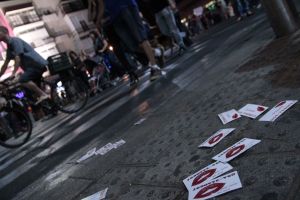 Back at the square, I stopped to listen to the classical music being piped in (no more angry violinist harangues) and just as the loneliness, longing, and isolation were setting in, I spied a fellow from the hostel who had seemed amiable. Now he was with a female however, and kept picking little fights with things I said, and eyeing me with a well-hidden but desperate resentment. Ah, I see. I am not the type to cock-block anyone, laddie, I’ll be on my way.

The walk back was an adagio past the city’s homeless, dropping shekels in their wrinkled paper cups, where they lay on the pavement among the city’s expensive footwear and used-up cigarette butts. Back at the hostel I climbed in my bunk above the odd older lady who never spoke to anyone. All the lonely people…where do they all come from?

Where do we all belong?

The next morning I came to Jerusalem.

← Where am I?
Mardin, children among the decay of civilization(s) →