Leaving Israel, passing through the future, and arriving in Sri Lanka.

It was difficult to leave Israel with a good taste in my mouth.

Trains and buses were sleeping due to a holiday, and the hostel told us it was a flat fare for a taxi to the airport. I found an extremely likeable professional dancer from Holland to share the cab with, and away we went. Halfway there the driver asked which terminal we needed. Dancer Man was on a budget carrier, Terminal 1, and I was on Royal Jordanian, Terminal 3.

“The price you paid only covers one terminal. Another 40 shekels to go to the other.” That’s just over $10.

Then I was scanned, swabbed, and under suspicion before I even entered the terminal.

“Why did you go to Morocco?” (Three years ago.)
“Um…because it’s pretty?”
“Why twice?”
“I took my girlfriend the second time.”
“What’s her name?”
“Do you want her measurements too?” (No, I didn’t say that. I am not writing this in an Israeli prison.) 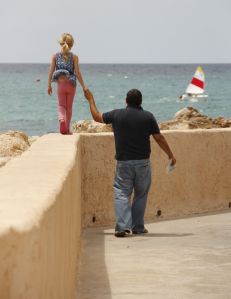 There’s obviously a lot of love in Israel. I tried to focus on images like this…

Then I stood in front of the bag inspection corral, where 3 of the 13 to 16 staff were actually working, slowly, and waited for my turn to have my underwear spread across the desk and rubbed with a magic wand. I knew I needed to do laundry, but this was just embarrassing.

I sat there planning my packing list for next time. 1 leather T-shirt/harness, 3 blow-up dolls, 5 vibrators, 7 riding crops…would that be a mitzvah?

I had two flights to reach Sri Lanka, changing planes in Amman, Jordan. That was a big hit. I had to try and explain why I was stopping there…on Royal Jordanian Airlines.

Finally I was handed a boarding pass. “You’ll have to go to the transfer desk in Amman to get the other two.”
“Two?”
“Yes, for the flight from Dubai as well.”
“Dubai?”

Given the assortment of words that were floating around my head, the theory was the less words I actually used, the less likely I was to get in trouble.

My second flight had been canceled, so for the second time in the last three years I was flying to Dubai to be passed off to Emirates Airlines. This is not a problem, because Emirates is fantastic, and the airport is a trip in itself.

Hard to tell (I was running to my gate) but that black wall is actually a waterfall.

I’ve been to some over-sized and ostentatious airports (see: Ben Gurion in Tel Aviv) but nothing matches Dubai International for sheer sci-fi spectacle. You walk for miles through a canyon of subtle commercials and stylish ornamentation, ascend and descend escalators alongside 3-storey waterfalls, and pass hi-tech displays that are ready for Tom Cruise in futuristic white haute couture to chase an alien villain past at any minute.

Take a train, because, hey, why not? Eventually you reach Terminal A to find yourself inside the massive arching ribs of an international transportation behemoth, but luckily it swallowed some nice bathrooms too. I brushed my teeth and took a seat behind Jimmy Buffet’s younger brother, who was telling a lengthy story about calling his credit card company to two women who were both immersed in their phones.

Dripping down through it all was the awareness that last time I walked those corridors I was with K, our backpacks stuffed with toothbrushes for kids in South Africa. Her absence this time made every bench into a memorial as I wondered “Is that the one where we fell asleep on each other’s shoulder?

I wonder if the guy whose giant hairy arms flopped into my side of the armrest noticed my refusal to look up.

I didn’t think I’d fall asleep in the back of a tuk tuk…good thing I put the camera away first.

A sleepless interlude in the surreal world of air transport, Gangster Squad showing on my tiny screen, and then I was in Colombo. I navigated the customarily poorly-marked process of visa and immigration, then through the waiting taxi drivers to reach the local bus across the street.

I got on, heard Sri Lankan music, talked to four women in brilliant-colored saris who giggled at me, and saw the scurry of 3-wheel tuk-tuks that dominate this hemisphere. I was exhausted, hungry, and completely in love with travel.

Bring on Sri Lanka!
(But could someone turn the heater off?)

← Mardin, children among the decay of civilization(s)
Feeling it all fall apart in Anuradhapura →

5 thoughts on “Leaving Israel, passing through the future, and arriving in Sri Lanka.”