Will the pattern be repeated?

I am a newly civilized creature from the hostel jungle. I walk around the more-than-one roomS of my house in confusion. What do I do with all this space? Anybody wanna couchsurf?

The shower is amazing. I was raised with an ethos of care for energy and water use, so just standing in the steam feels illicit, but surely I can break the law just a liiiittle, right? God that feels good. (And I don’t even have to wear flip flops.) You can try it when you’re couchsurfing.

Man, what a kitchen. Plenty of counter space, all the burners work, and I have no problem putting my stuff in the fridge or finding it later. The dishes are clean, the sink empty. We have two ovens. Why the hell do we have two ovens? Was this a bakery in a former life? Anybody need a place to bake?

And I’m in love thrice over, twelve legs to complement my two. They’re far too lovable to summarize in a paragraph, but suffice to say those furry bastards leave me shaking my head and laughing on a regular basis. Anybody need some animal love?

I have too many blessings not to want to share. 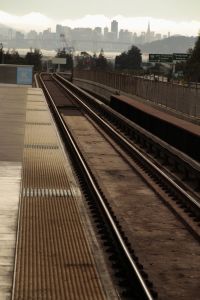 The location is ideal, with one of America’s better mass transit systems (not the most competitive title in the world) a mere block away, plus a drug-addled spider’s web of bus lines that I have not learned well yet, since the streets are relatively conducive to bicycicular passage as well.

San Francisco is close at hand, where friends abide in warm houses with chairs at the table ready for my visit. The same in towns throughout the Bay Area, and it’s not inconceivable that I would hear my name called on the street some day. There are people here who recognize me. If I keeled over dead in the gutter…my people would find out about it.

I don’t mean that to be dramatic, it’s just not what I’m used to.

There is a level of food security here that is unimaginable for billions of people around the world, not to mention the awed and wasted faces of millennia past.

You need this many shoes, don’t you dearie?

I have clean clothes. Every day. I wash them before they stink. It’s nearly free. I’ve even bought more of them, though I think I could still carry all my physical possessions at one time if I had to…but it’s getting more precarious. I’d better make two trips, or I’ll look like the junk woman from Labyrinth.

I’m getting work done at a better pace than ever before, and I feel almost good enough about it to share with a few more people.

Sooo…why do I wake up with varying degrees of a racing heart most nights? This doesn’t happen when I’m on the road. Is the project too daunting? The To-Do List too relentlessly undone? Someonething missing? Or is it just the adjustment of a vagabond to stationary life?

Earlier this month was the five year anniversary of leaving for my first big solo backpacker wander. It snuck by, a vagabond in the night, without my noticing until it had already left town. I wasn’t this Me yet when I left, but who am I now?

This is my third extended stay in the US since leaving my previous life. The first time, I lived with friends in lovely Portland, Oregon, but barely made it four months before I had to fly across an ocean to get my rhythm back. March 2010.

The second time I was house-sitting for friends, a beautiful house in a beautiful place with a kickass feline, and I didn’t sleep through the night a single time in the three month span. Cross the ocean. March 2012.

Now here I am, about to finish my first month stateside. Third time’s the charm? Or will the pattern continue? Will I cross the ocean in March 2014?

← Bored women, guns, and the company that owns you; in Costa Rica.
Is it weird being back in America? →

31 thoughts on “Will the pattern be repeated?”