The buses all had places to go, and gas to burn to get there. The expressionless faces of passengers (some things are universal) turned towards me through rattling window panes as I waited to cross one of San Salvador’s many busy roads.

A few blocks and a half dozen clusters of well-armed guards behind me, some of the people I’d met (and wrote about on the Ethical Traveler website) were meeting in an FMLN headquarters, but since I’m unaffiliated with the party, my presence was politely unwelcome. I’ve had people accuse me of being CIA before, and it’s not a comfortable experience, so I went looking for something to find.

That makes sense to a traveler.

The stoplight went red, and the cadre of windshield washers went to work, on my side a leathery older man in a black apron, and a younger woman in a white shirt that stretched across her heavily pregnant belly. I wondered how much they earn per wash, and per day. I wondered what life awaits that child. I wondered at a world where some have luxury sedans, and some hope to clean their glass.

Both workers returned my “buenas tardes” with smiles, his wide and hers shy.

The sun was strong, but not abusive, and I was considering a mango-something jugo when I heard the clash of metal. Again, and a third time, rhythmic. Through the intersection, hazy with dust and exhaust, I could see a man in camouflage shorts and a black vest juggling before the stopped cars. His hands flicked behind him, the clash of metal, and the sun glinted off three machetes as they escaped and returned to his hands. 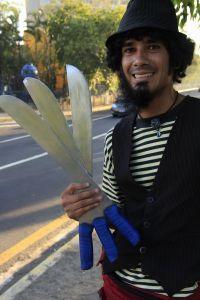 One should not distract a man who is juggling large knives, so I waited until he was between performances to talk to him. Joaquin Media-Barba (Half-beard) had an easy smile, though a weight never left his eyes. He started practicing with machetes a few months ago, and now spends several days a week moving between a few favorable intersections, no more than two hours at each.

We talked through the green and yellow, I watched another performance through a red, then we picked up where we’d left off for another green and yellow. The currents of conversation, the percussion of slapping steel, the implacability of a stoplight, the surges of traffic, the breathing of a city; everything was rhythm and cycles, and the sun watched it all with amused patience.

Twice through the cycle on a dry traffic island was enough for me. I went back to my wander, quickly lost in the sulky anger of bus engines and the expressive honks of Central American traffic, but for a couple blocks I would catch the clash of metal, flitting past me like birds in the canyons of street sound, as Joaquin went back to work.

← Passion, danger, guns and roses in Soyapango
Juan the Priest →