It was a perfect Sunday afternoon, all things considered. Soft, warm air that eased around, but that fell far short of windy; and no rain, but solid overcast. Those clouds in particular were crucial, since nobody likes sunburned cheeks or roasted wieners. No, not hot dogs and not faces either, I’m talking about the posteriors being presented and penile plethora on parade on the streets of San Francisco yesterday.

Folsom Street Fair began in 1984 as “Megahood”, at a pivotal moment for the SoMa (South of Market St) neighborhood, which had long been a working-class/industrial/warehouse area, with a large population of sailors from the nearby port and a “skid row” reputation. But it had something else too: a strong identity as a hub of SF’s gay population.

Folsom Street was the heart of the community, and by the 1970s over 30 gay and leather clubs had earned the area the nickname “The Miracle Mile”. Authorities and their “vice squads” periodically raided and closed the bars, but the community held its own against redevelopment initiatives for decades, until the AIDS crisis decimated the population, leaving them vulnerable to the “revitalization” drives of city planners.

Dying, harassed, and terrified of a disease killing with a savagery they had never seen, the community was weakened, but far from defeated. Authorities picked up the pace of bathhouse closures and bar regulation in 1984, and that same year, Megahood/Folsom Street Fair began, declaring to the world, and city planners, that the gay population was still alive and strong.

Today the festival is the third largest single-day spectator event in California, after the Rose Parade presented by Honda, and San Francisco Pride Parade (presented by people with hearts and souls, just like Folsom), with 400,000 people filling 13 city blocks, and generates over $250,000 for local charities working in public health, human services, and the arts.

God I love this city. 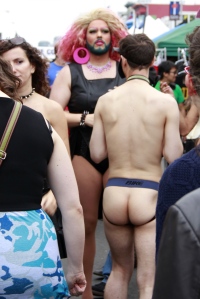 Inexplicably, despite having grown up in the Bay Area, I had never been to “Folsom”, and jumped at the chance to go yesterday. Accompanied by my lady and two of her friends, I meandered through the press of leather harnesses, bare booties, and smiles. Leashes, lashes, and laughter. Corsets, ball gags, and unabashed joy. The fair celebrates not just gay and leather culture, but fetishism in general, and expands to be the sort of pan-inclusive acceptance that makes me so proud of my city.

Guiltily aware that it’s the privilege bestowed on me by the random circumstances of my birth, I always enjoy being in the minority, on Zambian trains or Kurdish streets, and now here, surrounded by a press of people so expressively interested in different things than I am; I felt comfort and an upwelling of joy. How beautiful that groups so long stigmatized and discriminated against are able to come together in the sun and dance in the street.

That joy is a great feeling, but was I missing an opportunity? I hunkered down to imagine a world where this was the everyday, a world dedicated and dominated by a sexuality I did not share…would it bother me?

The thought experiment failed, and I can tell you why. Simply being in the minority is not the point, not when the majority is so welcoming and supportive. There was no one shouting hateful “hetero!” in my face, nor denying me any sort of opportunity or possibility based on my natural inclinations. Here, people can just be as they are, the way god/nature/the matrix made them, without shame or condemnation for selves or others. Being in the minority here was less oppressive than being in the minority of people who wish book stores were open until midnight, and I wanted to hug every single person on that street.

Folsom Street Fair isn’t for everyone, and the consensus seems to be that if you’ve seen it once, you’ve seen it enough, but I for one cannot wait for next year, to walk among that air of beautiful humanity, love and San Francisco at its finest.

5 thoughts on “Folsom Street Fair; or, leashes, lashes, and laughter”