The rumble of three overhead, hours ago, provoked a single word: “Ferguson.” A quick check showed that Officer Darren Wilson will not be indicted in the killing of Michael Brown. Photos coming out showed a dense protest of bodies blocking a freeway onramp. “That’s…right here,” said my friend, “around the corner.”

The protest had closed off both directions of Interstate 580 when I got there. Signs, chants, and a community’s pain were on display. They wanted to express outrage at police impunity and race relations in our country.

“Justice for Michael Brown!” they chanted. “Arrest Darren Wilson!” they shouted. “No justice, no peace, no racist police!” They wrote: “Black lives matter.” 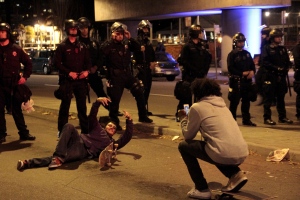 The wall of cops stood calm, passive, taunted by males of just that age, in all black, on skateboards, behind bandanas, with middle fingers raised. I stood close to those officers, saw the various hues of their skins and the uniform resolve in their eyes, human, but dedicated to their profession. Someone piled garbage in the street, and soon it was on fire. I asked an angry young lady if she ever feels like we’re shouting at the wrong people. She looked at me blankly, walked away.

Over the next couple hours, the police steadily herded the crowd away from the interstate, and the crowd dwindled until the last lingering cops ate hot dogs as I reclaimed my bicycle. Home was close…but these are important times, an important night, so I went downtown. Just to see.

They’d already broken a few shop windows when I got there. The mood was different now. In quiet moments before the storm, on side streets and empty corners, I thanked the officers for their patience, and reminded them that only a small percentage of us were violent, that the rest wanted to voice our anger at affairs in our shared nation. In their eyes I saw the answer “We don’t like it either. But we can’t say that right now.”

I wonder how things would go, if they could? What if the front row held the protective gear, and those behind held signs saying “We think black lives matter too.”? What if the cops just didn’t show up?

Because you know how this goes. The night gets later, the ratio of rationale to rage skews. The fires get bigger. The chanting more aggressive, degenerating into “Fuck the police!” This crowd had no rational path left, just an inevitable one.

Bottles flew regularly now, broken glass on uniforms. Most of the faces around me showed concern, disapproval, the awareness that this was counterproductive, not the reason we were there, not achieving our goal, not articulating our stance. Damaging it. This wasn’t protest, it was hooliganism.

Shifts in the police line had been provoking short stampedes all night, but no one tolerates attack indefinitely. I could feel it coming. I was surprised it took so long. The cops I had spoken with were now wearing gas masks. Tense minutes before the panic began in earnest, and in its wake came the bangs of rubber bullets, the hiss of tear gas canisters, and the explosions of flash grenades.

All was chaos, all was noise, all was fear and attack. A protest against violence, against police brutality, had reached a point where the police were responding with brutal violence. It all made me so sad. Such a waste. Such shame. On all of us.

They pushed us back a half block at a time. The announcement was background noise, something about penal code such-and-such and how if we did not leave immediately we would be forcibly removed, with potential for significant injury, and arrested. They would reach a bonfire, and pause while the fire department extinguished it. 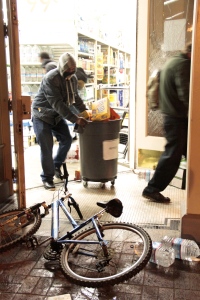 Shop windows shattered, looters ran out with armfuls of booze. Cell phone cases crunched across the sidewalk, the owner helpless and angry, a colleague crying “Why are you doing this? You’re hurting Oakland!” to a woman who was either drunk or just not playing with a full deck of cards.

Then the shields would come at us again, batons held ready, more broken glass. More rubber bullets and stun grenades. The crowd was reducing down to the most militant, most violent. When a rubber bullet rebounded off the wall next to me and off my leg, that was enough. Have you seen the pictures from Ferguson of what it does to a human body to be hit by one of these? It seems to basically liquefy the skin, leaving a hole in your most basic of armors, through which all your raw insides, damaged nerves and angry inner core can leak out.

Two shells sit next to me now, as I type. I tucked them in my pocket, looped around the police line, and rode home. Traveling the streets of Oakland tonight has a soundtrack of crackles as broken glass pops beneath your tires. Police cruisers, personnel vans, and the occasional armored bus account for 90% of traffic, and those helicopters are still patrolling overhead. Entire blocks smell of smoke, some of it burns.

How does this happen? A legitimate expression of a reasonable anger smashes up against the wall of our systemic indifference, and in the futility of that deflection, the adolescent idiocy of the hooligan is the only side that has an answer. So instead of a united expression of dissatisfaction, today we will have photos of vandalism, violence, and anarchy. The chance to say something, wasted.

Is this inevitable? I remember the Occupy Wall Street movement. That, to me, was this country’s best chance to hear itself, to regain its soul, to make changes, peacefully. That didn’t happen. The authorities doubled down, the 1% got even richer, and nothing was done to address the bleeding of this nation.

I was overseas when Oakland PD attacked the Occupy camp here, with the same tools but more brutality than tonight, and it is still a stain of disgrace on the city. Tonight? The police came out looking better than the protesters. Maybe Occupy was our big chance, our peaceful protest. Seeing how that went nowhere, what else is there to do but smash?

← Leave it to the Dutch to save the future. Maybe yours, maybe mine?
Protest in Oakland, Night 2; I wasn’t expecting that. →