Dear fellow Oakland protesters, and others

The sort of legitimate protester I went to support

Dear fellow protesters in Oakland, thank you for coming. I know you’re angry, so to not waste your time I’ll get to it:
What is the point? Your point. Your purpose. Your goal. Why are you here?

Are you here to express your frustration with race and class relations in this country, advocate for justice and change, and oppose the militarization and impunity of a segment of the police?

Or do you just want to burn shit?

Because the two are mutually exclusive. Standing for the former entails NOT doing any of the latter, and doing the latter destroys the voice of the former.

Are you here to protest, or riot? They are fundamentally different. Is your enemy hate crime, or Starbucks? Do you want to build something better, or just smash what’s here? Do you want to oppose those responsible, or just harm your neighbors? 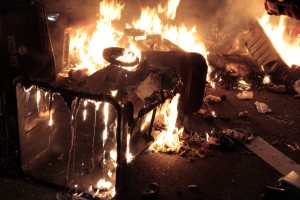 The War on Trash Cans

My opinion? This War on Trash Cans accomplishes nothing but toxic fumes. This aggression towards all police officers does nothing but further inhibit dialogue and progress. I see demonstrators and police pushing each other into simplified extremism, and it makes me sad. I’ve known good cops. Men and women who I was glad were there to back me up.

When will you learn that violence does not have the effect you wanted it to when you were an angry 16 year old? It’s time to grow the fuck up. 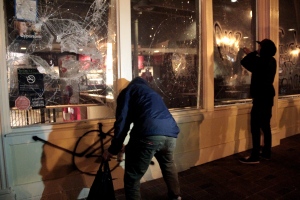 Just an excuse for their ugly little tags

As you may have guessed, angry violent “protester”, I am sick of your shit. You are not a protester. You are a hooligan. And I will not stand by you. So tonight, as the helicopters again drift overhead, despite my desire to finish what I’ve started and demonstrate my conscience, I am staying home. It’s not because I’m scared, not afraid of being arrested again, but because last night looked to me like a movement degraded, a legitimate grievance lost in petty vandalism, and I will not participate in that, even tacitly.

Legitimate protesters with something to say were there too

To those actual protesters, both previous night, and probably tonight too, I thank you for caring. Apathy is the great enabler of discord and abuse.

And to those who have come to Oakland to hide behind your coward’s mask and make trouble in someone else’s community… Violence breeds violence, so please don’t tempt me.

← Protest in Oakland, Night 2; I wasn’t expecting that.
Campeche nights, snakes and ebola →

8 thoughts on “Dear fellow Oakland protesters, and others”