I had my perception of the Oakland protests.

Night One: people upset over the state of race relations in our country, and police impunity in reflecting it, demonstrated in the streets with signs, chants, compassion and anger. It was the purest form of democracy left in our plutocracy. 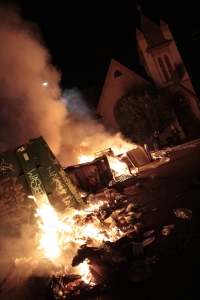 By the end of the night, things got out of hand, understandable with that much emotion and the way crowds work. The police showed admirable restraint at first, and I thanked them for it. People were wrong to throw bottles, and the police didn’t need to respond with tear gas, rubber bullets, and flash grenades against a civilian demonstration. I was disappointed to see the night end that way.

Night Two: perhaps a result of the prior mayhem, the crowd was smaller, and more militant, the message diluted in petty vandalism and burning garbage, faces hidden behind masks to enable counterproductive hooliganism. I’d seen enough, left the contested street and was waiting until I could reach my bike when one cop, maybe looking to make an example, maybe filling a quota, or scariest of all: having lost control and lashing out, had me arrested. I spent the next few hours with my hands zip-tied behind my back, seeing a side of the law that I thought was reserved for those who deserved it.

Night Three? I stayed home, angry at those I felt were damaging our desire for change. I felt I had my understanding.

But last Thursday the rhythms of a protest drifted in my window. I’ll go look, real quick, real careful, to see how things are going. I found a march, resolute and disciplined in the statement of their message, no mayhem, no excuse for police action, demonstrators I’m proud to have as countrymen. It felt good to see.

Then I looked left to a line of face-shielded police blocking a street, ready to arrest us…if we blocked a street? A cold feeling took root in my core, with cracks of anger and flecks of fear. Instead of cops doing their best, they seemed like ominous soldiers of suppression. 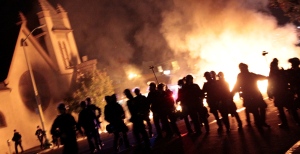 And every nauseous cell of my skin felt my white privilege. I had been inconvenienced for a few hours, my shoulders stiff and achy from being pinned behind me, and have to show up in court, once, for what I feel are unjust reasons. So many deal with so much worse, yet there I was, disturbed by the sight of the police.

What is it like for those who live under constant threat of police abuse? How the hell do we expect people to remain calm who have watched their brothers beaten, their fathers humiliated, their whole demographic thrown in prison (while the real criminals go marching on)?

A friend told me of his police ride-alongs where procedure is to stop (black) men on the sidewalk, handcuff them and sit them on the curb, THEN start to talk to them, ask what’s going on today. That has never happened to me, not in my white skin, in my relatively affluent neighborhood, where, despite being racially mixed, every driver I’ve seen pulled over since moving here was black or latino. Every single one. A few hours being treated like a dangerous criminal when I hadn’t done anything wrong and I was sickened; what’s it like when that’s your everyday reality?

So what do we do about it? Politicians are clearly not going to lead, and the police aren’t going to break the cycle of aggression by themselves. And the courts? In 2010, out of 162,000 grand juries, 11 did not result in indictments. 11 out of 162,000. Yet now we have two out of two deciding there’s no need to even have a trial. I see that as the courts declaring that it is not a crime for a cop to kill a black man. This cannot go on.

So again, what do we do about it? Smash Starbucks? Shake our heads and go back to watching Jersey Shore? Or maybe we, those of us with hearts and souls and self control, should spend some time in the street. Do you think it’s a crime to kill a black person? Do you want some punk smashing a window to speak for you?