Earthquake in Nepal, inevitable and unexpected, national and personal 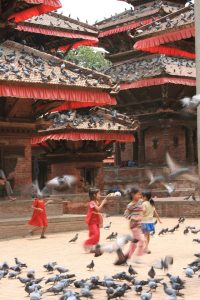 One of my photos from Kathmandu, 2011

Everyone knew an earthquake like this would happen and devastate Nepal. The geography and history made it obvious, inevitable. Who could look at those fault lines and think otherwise?

During my time there, I never thought something like this could happen. Their bright smiles in my English classes made such devastation unthinkable, unjust to the point of impossibility. Who could look into the faces of children and think otherwise?

It was a Saturday morning stroll around Boudhanath. The warmth and joy of the Nepali people were a gift to experience.

The ancient temples of Kathmandu, Patan, Bhaktapur, and throughout the country were stunning, statuesque in ancient presence, but largely made of brick, a material incredibly vulnerable in an earthquake prone country.

The 8th grade class at Himalayan Secondary School was 30 boisterous bodies in a tiny classroom where silence was unknown, and when returning homework I had to be careful not to read a boy’s name next to a girl’s or the class would erupt in giggles. At Kalika, the other of the two schools where I taught, 8th grade was three agonizingly shy fourteen year olds, two boys and a girl, and prying a word out of any of them took all my tricks, their adolescent self-consciousness thick in the air, blushes in silence instead of cacophony. 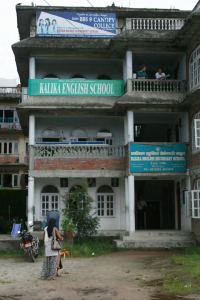 Kalika Secondary School in Bhaktapur, home for summer 2011 and one of the schools where we taught. Parts were still unbuilt. I fear what it looks like now.

Massive earthquakes have rocked Nepal at intervals throughout its history, destroying homes and lives with tectonic potency and implacability. There was a little quake soon after we left, just a shiver really, and a wall I’d often walked past collapsed, killing two.

I read a section of Charlotte’s Web to a 4th grade class, and their homework was to summarize what they’d heard. One little girl, with a shy smile and a precisely placed barrette, remembered almost every detail and blushed when I complimented her on it. I tried to get her to borrow the book when our time ran out, but she wouldn’t.

The principal’s son was in one of the 5th grade classes, and the pressure on his thin shoulders was obvious to see, as was the crush the girl in the row behind him had for him. He had no idea.

Workers earning next to nothing walked through the streets all day, carrying backbreaking burdens of brick and earth in wicker baskets, some to restore ancient edifices, but more often they sought to keep pace with the massive population growth of a city that swelled during the violence and insecurity of a long civil war in the countryside.

The 9th and 10th grade classes were a particular joy, with kids on the cusp of adulthood, their minds and characters vibrating with proximity to their futures. They heard about the poetry competition we were doing with the younger grades and asked to write some too. There was one boy in particular whose work could, should have been published. I would have suspected plagiarism if his words hadn’t been so quintessentially Nepali, so perfectly tailored to his life.

Standing on a temple like the majestic Maju Deval gave one the sense of history rising up through the soles of your feet and into your soul. From there, I remember looking down at incongruous yet intimately Nepali landmarks: a western-style relic of the Rana Dynasty, who were in power when the last big earthquake happened in 1934, next to a classic Newari temple of Vishnu. Such ancient capacity in a country now wracked with poverty, where preparing for a future disaster was a luxury they could not manage.

I fear for the friends I made in Nepal. I fear for the strangers who would have been my friends if we’d had the chance. I fear for those who have already lost loved ones, and for those who now the deaths have not stopped, nor have the aftershocks. It is incomprehensible to think about what life must be like there right now, but the desire to go, to see, to help, is kind, but misplaced. They don’t need our bodies. But they could use our help. There are many worthy charities, but I have always found CARE and Oxfam to be top notch.

11 thoughts on “Earthquake in Nepal, inevitable and unexpected, national and personal”