There’s something about Venice

Venice was after a quiet quarter eternity crossing Croatia and Slovenia. On the cliffs of Kotor and alleys of Piran I was stunned speechless, which was fine since there was no one there to hear my awe anyway. Perhaps my first, perhaps my worst, and nearly the only conversation was with the Australian I’d courted through the lanes of Ljubljana. Her laughing eyes had gone pensive when she asked me to help her pick out a present for her boyfriend in Prague.

“You have a boyfriend?” I asked, consternation, sad irritation.

“Well, not really a boyfriend, no. Just a guy I’m kinda into. But he’s kind of a jerk. And he’s ten years younger than I am. And he’s more into my friend than me.” And I was ready to scream.

So back into the solitary wandering of off the beaten path, until I reached Venice, and a hostel somewhere in the labyrinth of Dorsoduro, where I had just the one oddly shaped dormmate, of drooping disposition and uncertain provenance, his only utterings such indiscernible mutterings that I couldn’t even listen for an accent.

“What’s that, my perhaps German friend? Say again, you maybe-Englishman? Did you know I’m going insane right now? That I talk to myself, uncertain when the monologue is internal or external?” I had a surplus of myself built up inside, seeds of speech sprouting despite the infertility of an absent audience, so the lasting impression I had of Venice was a labyrinth where my mind had fuzzed away from coherence. 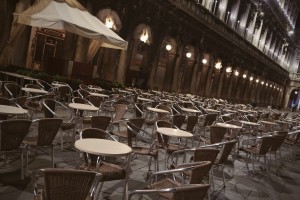 But this chance to be a guide took me back there. To the Austro-Hungarian causeway, where I felt my skin prickle as the lagoon opened up before us, where boats and history swirled and breathed. I was back, with a busload of humans labeled clients but defined as friends, and I would have no time for useless wandering, no luxury for blurred brains, and any word I made was likely to be heard and noted by the alert minds of my companions. And Venice itself? It was there, present, visible in a way I hadn’t been ready to see before. And the rain poured down.

Now I had no interior fog to obscure the columned balconies of ancient homes, no haze to hide the green appeal of winding waterways, and no fugue to muffle the drifting lyrics of gondolieri somewhere around the bend. I was left, bare and aware, vulnerable to the romance of Rialto and saturated memory of San Marco, where history washes around the walls that inspired Napoleon on the echo of the campanile bells.

This job, this opportunity, is a gift. To see past places in the mindful present, new things with avid eyes, and the traces of my past wanderings from the balcony of my present.

Venice? There’s something about Venice. See you there.

6 thoughts on “There’s something about Venice”