Okay fine. I give up. I love Paris too. 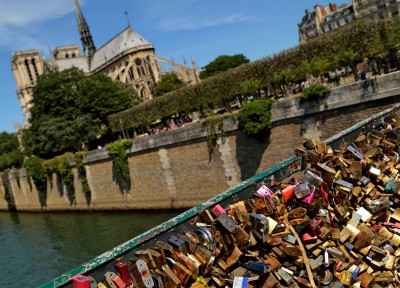 There’s something terribly cliche about loving Paris. It’s like loving chocolate, puppies, and The Princess Bride. Of course you love those things. So does everyone else. Not interesting. After reading the 10,000th love poem to the City of Obvious, I had decided I wasn’t going to comply. I was going to snob the snobs.

On my big Europe solo wander, I spent a couple days in the city. Just long enough to meet some of the smelly fellows who shared my dorm room (including one who didn’t seem to have packed anything but underwear), walk rain-soaked streets where fancy people were being fancy, and disprove the stereotype of delicious Parisian cuisine: the kebabs were just as greasy and gross there as everywhere! Take THAT!

Finding a copy of The Tropic of Cancer on a hostel shelf a couple towns down the road made me more kindly disposed…but only to Paris of the 1930s. That age of Gallic elegance amid crass ennui and the inherent decline of being on top was past; the 21st century could keep its tourist temple! 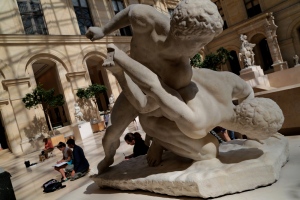 Then I got this tour guide job, and where must I guide, every tour? Friggin Paris! Of course. So I went to Paris. Ready for snobs, stinky cheese, and pretentious wine. Over-dressed fashionistas sipping café in a café, staring at ca-mé. Grandiose museums with grandiose price tags and inscrutable art that we come see because They have told us we should.

“Yup.” I’d say, snarky and justified. “That’s the Mona Lisa. Just like it always looks, on every postcard and dorm room wall.”

What did I find? Precisely poignant cheese to go with eloquently savory wine that tastes like the place it grew. A city so dedicated to living well that they dress well just to go to the café, where they make no pretense of isolationism but angle all the chairs straight out to overtly people-watch. Just the way I love to do. And if I now have nicer clothes by several notches than when I came around as a vagabond? Feels good. Doesn’t mean I’m superficial now. And the museums? Succulent with centuries of creativity and culture, enduring manifestations and reflections of the historical, or spiritual, or emotional, or sexual, or tragic, or any number of the other passions in human life. All it took was a little education, a little context, a little knowledge of how to look, some kind of (ahem) guidance, and it all came alive. Not inscrutable. Beautiful.

And the last piece? The snobs? Did I find them? I found one. But then I stopped being him.

So next season I’ll go back to Paris. I’ll walk those gorgeous boulevards, thinking about Baron Haussmann, past the Hotel de Ville (which was never a hotel) and the Conciergerie prison (which kind of was) until my feet ache with satisfaction. Then I’ll sit on a wicker chair beside a mid-sized stream of joie de vivre, and eat the flavors that tell me where I am. (I know a great place for boeuf tartare if you want to come along.) I’ll watch petanque, sit by the Seine, mirror the emotions Rodin placed in clay, and get the chills when I hear Emmanuel ring out of from Notre Dame’s south tower, the way the 13 ton bell did when it announced the end of Nazi occupation.

And best of all, I’ll sit down to dinner, or lean back to a coffee or stroll around with a gelato, visiting with the friends I’ve found in that city. In that city which I’ve found to be a friend. Yes, I admit it, I love Paris.

← I’m thankful for grandma’s bloomers
Community of strangers, on one last night in Rome →