“Mi scusi” is Italian for “Excuse me.” You might hear it when someone interrupts, or steps on your foot, or when the maid opens the door to your hotel room without knocking, two hours before check-out, right as you step buck naked out of the shower four feet in front of her. The words are the same, though in the last case they’ll be said with an edge of housekeeping panic that transcends linguistic boundaries.

My Best of Italy tour hadn’t even started yet and I was already learning. What else might I learn, before the 17 days were over? That it is impossible to find a gondolier in Venice who’s not a self-satisfied schmuck, but we love them anyway? Yes. That you can be in one country, politically, and another, culturally? Yes. That wine tastes good if you’re ready for it to taste good? Pretty much. 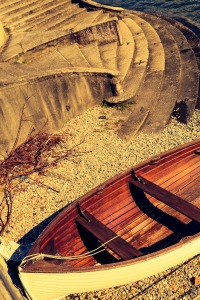 Cadenabbia, on Como’s western side, is not far from where Mussolini met his end

How about fascist dictators? Everyone-worth-listening-to agrees that Hitler was a terrible, terrible human being. Probably the worst ever. And Mussolini? Again, it’s obvious that teaming up with Hitler and sending thousands of people to the concentration camps is about as evil as humans get. Add violent political repression, oppressive morality laws, and the murders of countless political opponents and you have a pretty good grasp on Mussolini’s soul.

Is that it? Black and white? I wondered this as I hiked around Lake Como, looking for the place where the Italian dictator met his end. What would I find there? I’ve been to the parking lot in Berlin that they think is over Hitler’s bunker, now a place of oil stains and dog poop, and found it appropriate. Would I find something similar here?

In Spain you used to hear the lament “It was better against Franco.” Nostalgia for the simpler days, when things worked, courtesy of the leader you hated. (Versus now, when things half-work, courtesy of leaders you scorn.) I imagine Americans would have a similar nostalgia for the Cold War if Russia weren’t still so willing to destabilize the world. (Invading a sovereign nation and annexing it? That’s so crass and 19th century. Nowadays we do it with Trade Agreements, Vlad.) 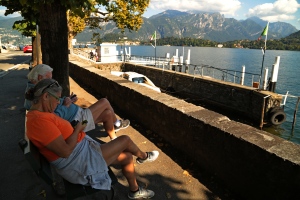 Sorry to distract you from your phones, but could I interest you in some info about the place you crossed half the planet to see? What do you think about Mussolini?

So when some Italians reminisce about Mussolini and say “He made the trains run on time” I figured it’s just those not-entirely-thought-out rose colored glasses for a black & white age, when enemies were obvious and tangible, and you could comfortably reassure yourself that there was nothing you could do about it.

But a good tour guide should have a deeper understanding than the average traveler, so I went looking for Mussolini, and his Italy.

What I found, and what I think it means…on Friday.

← Community of strangers, on one last night in Rome
Was Mussolini really that bad? →