A visitor in my land, for a moment 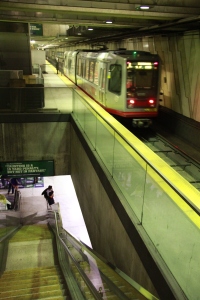 Descend into the underworld of Bay Area public transit

The first announcement was so bland and polite. “The eastbound train on platform two is going out of service. Please do not board this train. It will be departing momentarily.” The crowd of would-be occupants leaned in, wanting to pounce. But with the doors closed, the semi-broken BART train was impregnable, they could only stand and stare.

“The train on platform two is ready to depart, please move back from the yellow line. So it can depart.” Mild irritation leaked from the control room through the speakers, but the crowd continued its irreverent looming.

“We got another train waiting in the tunnel right behind that one, people, but it ain’t going nowhere until you all move back behind the yellow line.” Slight roils in the crowd as people stepped forward, onto the yellow line, to see who was holding things up. 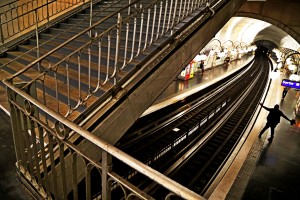 Paris Metro, where you dance while you wait

It was all just another moment in Bay Area Rapid Transit, uninteresting to natives, but I was not yet in those familiar shoes. I watched the semi-functionality through the lens of Paris’s excellent metro system. And when the next train arrived, and people just HAD to get on even after it was packed, blocking the doors and ignoring the announcements of “There is another train right behind this one. We have four trains in the next ten minutes. Please do not block the doors.” I watched it as a participant in Germany’s polite people-moving procedures, balanced by the memory of fighting my way into Sri Lankan third-class compartments.

I stood there, an American in America, but viewed the perturbations and public percolations through the lens of a visitor. Not being part of the crowd, everything they did was demonstrative. 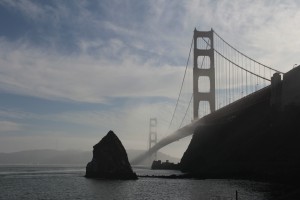 Stop me if you’ve heard this before, but I usually find my culture shock in the grocery store. The expanses of food, a surplus of success unimaginable to 99% of the humans who have ever lived. With air conditioning and pleasant music (and sometimes porn!). And all processed and packaged, distant from the soil and your hands. And the ankle-deep irritation in people pushing to get their Fat-Free Greek Yogurt, creamy and luscious and decadent but hold the calories cuz this is America. I feel like an alien anthropologist, observing their crankiness while they live The Dream Life. I feel no scorn, but love these strange humans, just as I loved the Venezuelan demonstrators, the Zambian church-goers, the Nepali schoolchildren, and the Burmese street vendors. It’s easy to feel affection, from a distance. 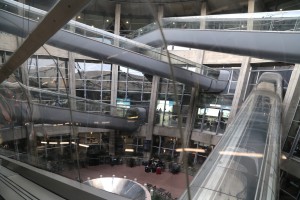 But this time I hadn’t returned from the developing world, so it wasn’t our ease that astonished me. After six weeks in Western Europe, it was our difficulties. Our cheery little BART-that-could, working so hard for so long at a task so large and so thankless, with so little maintenance and so much controversy, compared to the efficiency of a more collectivist continent. Bunch of socialists. Arriving on time. Pish!

It’s not a matter of superiority (ex: Charles de Gaulle, which blows, compared with SFO). I’m not bagging on America (put your flag rapiers away). It’s obvious to me that there is no best country. It’s all just humanity. Fascinating and ridiculous. Doing its muddling best. But when nothing is automatic or assumed, and nothing belongs to me, everything is more visible, and riding home becomes a cultural experience. It’s wonderful. 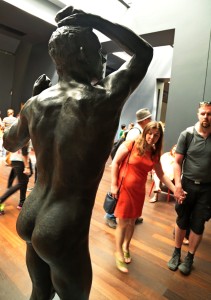 I think these two were having a cultural experience

But there’s a price to the power of the witness. The first week, not quite reconnected yet, conversations with friends can be slightly stilted, and the stimuli of the day leave me feeling…unfinished. Still hungry. Stability has a muffling effect, the ease of the easy and its reduction in vibrance. But this phase is finite, and mundane irritation is tragically easy to reacquire, but during the transition I feel like a traveler held in place.

But home is a steady thing. It grows over and into my consciousness. It takes about a week to put down the mindset of movement and take up the perspective of permanence. But soon I can feel the streetplan spreading around me, sit quietly with friends without the need to say “What have you been up for for the last two months?”, and remember all the marvelous details that evolve when you’re in one place for a while. Rock climbing with friends, a variety of tea options, and clean laundry all the time! And tonight, I’ll have dinner with friends, in a place I know well, at a time I can predict. And that’s a beautiful thing.

But first, I have to go to the store. I hope there’s no one blocking the particular tortilla chips I like. That annoys me so much.

← Was Mussolini really that bad?
Myanmar and America politics, only one we can like →

9 thoughts on “A visitor in my land, for a moment”