Hanoi is many things, let’s start with the loudest

Hanoi is of course many things, but one seems like a logical place to start. And nevermind that two come to mind first. So we’ll begin with the primary denizens of the city, filling its streets like those industrious ants, buzzing through its byways fit to put the flies to shame. Even when they’re still, they line the sidewalks like ribs, or cluster in alleys that no one else needed.

Everybody has one. The humans that coexist with them. Or at least, every family has one, both kids held in mother’s arms while dad steers, and she’s not tense, it’s just too everyday for that. Because you have to take the scooter. Everybody does. Drives. Walking is a precarious dare, in among the handlebar horde, since didn’t I already warn you that everybody drives? It’s a feedback loop, 49 cc’s of inevitability.

How else would you deliver dishware?

I smile more these years after giving up on auto ownership, but on those times when I have to pilot one of the things, or more precisely when I have to park one, I wonder at the foolishness of people owning four-wheeled transport in San Francisco. Everyone should just have a scooter. You can fit so many more, scoot so much quicker, and get much better mileage. And you’re out IN the world, not hidden from it!

So while I love walking the streets of a new city for hours at a time, in Asia I always make it a point to catch a scooter ride somewhere. Rickshaw? Tourist gimmick. Scooter? Cultural interaction.

“Have you noticed how many Mercedes there are here?” my Vietnamese friend asked me yesterday. I hadn’t, but that seemed impolite. So instead I asked something I’d been wondering.

Sorry about the blur, but you can still see his method, right?

“Speaking of expensive cars, back home I’ve learned that BMW drivers are more likely to be assholes,” I haven’t seen any Priuses so didn’t need to include them, “Is that true here too?”

My friend scoffed. “Anyone in a four-wheel is an asshole here.”

Seemed true, on yesterday’s walk that took me along Hoan Kiem lake, past the Opera House, and through byways and backstreets until I caught a bus in front of the Soviet Friendship Hospital. (Because that’s a thing.) 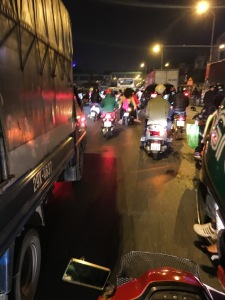 Taking a phone photo while riding down the ~highway. The things I do for you people, I swear.

So after dinner, somewhere off my map, I grabbed a scooter taxi guy dude thing. I don’t know if they have uber/Lyft here, but I’ve seen plenty of Grab Bike guys in their uniform green jackets and helmets. He handed me his spare, which perched on top of my massive cranium, squeezing a headache in but that’s the price you pay, along with about $1.00 to cross the city.

Motorcycles technically have their own lane here, a great idea, but traffic is a fluid concept, lane lines and red lights whizzing past all around like so much decoration as we squeezed between trucks and two-wheeled clusters, wrapped a roundabout and dodged the people going the wrong way. It’s another of those times when you just have to sit back, relax, and wait to see if you make it.

I did. Home, to another day, and tonight, I’ll head to another place. 300+ kilometers away, I think I’ll pass on the scooter this time. My overnight train is out there somewhere, waiting for me…

← I’m here
Trekking in Sapa, and a moment everyone who’s done it will remember →

7 thoughts on “Hanoi is many things, let’s start with the loudest”