Sri Lankan city of kings, one of the oldest continually-occupied cities on Earth, and focal point of Theravada Buddhism for centuries, Anuradhapura has many claims to fame, but I was having trouble seeing past the heat. The midday sun already felt like a sunburn in the sauna, and all I could think about was the relative cool of my stifling but shaded hotel room. But Anuradhapura had another surprise first. 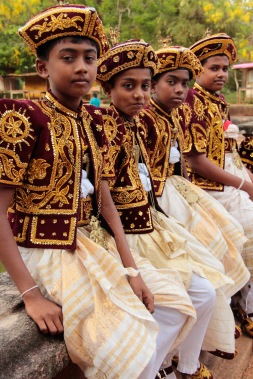 If I was sweltering, I don’t know how these guys made it to the wedding

He pulled up on a thick-bodied motorcycle, ornate white cuffs on his uniform and a thick handlebar mustache that would have fit comfortably on a California Highway Patrolman. Some things say “cop” in any language. He stopped, appraised me through mirrored sunglasses, and waved me over without a smile. “You are a foreigner” he stated the obvious, then paused a long sweaty moment. “Where are you from?”

“America, the United States,” my customary answer covering both forms.

“Ah. America.” Another pause. It was the Obama years so I was relaxed, but the question of whose family might have been blown up by US weapons always lingers. But a grin split the stone crags of his face. “America, good!”

He asked me how I liked Sri Lanka and if I had already eaten lunch, then asked the question that I could see had been on his mind all along. “America, it is very dangerous there, isn’t it?”

There I was in northern Sri Lanka, one of the few tourists in a region abandoned by tourism during the atrocious Sri Lankan civil war. People all across Sri Lanka had urged me not to come to this region where land mines and trees decapitated by artillery fire were still common, but he thought America was the dangerous place.

“Um. No, not really. I don’t think America is dangerous” I said, anchored in the awareness that American fears are far outsized but not wanting to go into the fact that my white privilege gave me a different experience than people of color might report. And probably not a great idea to discuss police shootings with this policeman.

He leaned forward and asked “But is it not true that anyone can have a gun in America? Big guns. That there are millions of guns in the hands of normal people? Untrained people? Even mentally unwell and unstable people? Anyone who wants them, and as many as they like?”

He had me there. “Well….yes…” He sat back and grinned, having won his point and I had to concede that I was at more risk in the US than I was in war-torn Sri Lanka.

I remembered that perception of America after watching Trump humiliate our country in his meetings with Angela Merkel this week. Few people conflate citizens with their government, but that was easier when it was just policy differences. Now, when the very sanity and moral decency of our country is being daily called into question, I fear what everyone else on earth (outside of Russia perhaps) is thinking about us.

In one short month I’ll head back to Europe, including Merkel’s Germany, and I’m going to need these weeks to think of competent answers to the inevitable question “What the hell is going on with you Americans?”

← The Dutch oven of modern politics
A Tahoe Reminder →

18 thoughts on “Seeing America as a Sri Lankan cop”