Tall and dark, their food was spiced differently and they spoke of a place called Yugoslavia that sounded exotic and sad. But it was all just texture for the aunt, uncle, and two cousins I grew up with. And it didn’t matter at all that instead of a genetic link of ancestry, we shared a history of morning drives towards afternoon picnics before evening dinners and piling into the streetlit car worn out and over-ready for bed. I referred to them as my “parallel family.”

We’d been family since before I was born. Back when our moms were college roommates. So I showed up for university with eyes wide for the first glimpse of the people who would someday be uncles and aunts to my own kids. No pressure. But impossible expectation is a supplementary explanation for why I am not in touch with anyone from my college years.

Within weeks of school starting, I was in a relationship that devoured most of my hours. Waking and sleeping. I basically lived in her apartment. (Is 15 years too late to send an apologetic fruit basket?) They were seven good years, but when they were over, they were gone with the girlfriend.

That was always my way. My romantic relationship had absolute primacy. Where I spent my time. If my She was unavailable, then I’d call up a friend. Familiar story, tragic mistake, but comfortable in the meantime.

So as I entered this phase of my life (single for the first time since…elementary school?) I resolved to do it differently. I just didn’t know what that would look like. 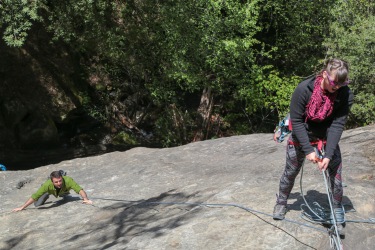 It looks like Mondays on rock climbing walls with East Bay friends. Tuesday Lebanese burrito in Dolores Park with my brother and his crew. Wednesday climbing with an amplified set of San Franciscans, before Thursday with my old roommate and his fiance. Friday’s Happy Hour will be well named for the company of friends from middle school, and Saturday we’ll socialize in the farmer’s market sunshine.

And the weekends? Driving to Point Reyes for green hillsides and ocean vistas before watching the sun set into my beloved Pacific Ocean, whose eternal beauty complements mortal friendships, whatever their scale.

Or drive down to Castle Rock to rappel down a granite slab then climb back up, sticking fingers in arachnid crevices and unknowable mammalian dens.

Tahoe. Made sense at the time.

Or up to Tahoe, maybe snowshoeing, or a social maelstrom of mullet wigs, karaoke, and the conviction that no matter how weird the conversation gets, that’s cool.

None of this is a shocking revelation. That friends are good. But that doesn’t lessen their importance. In our Social Media Age, murky medium of social isolation, I want to shout my gratitude for real human contact out into this inhuman ether, knowing it will reach the eyes of friends I’ve never met (yet?), and maybe even stir an additional gathering of friends or two.

Because whether we share genes or not, met in college or on the wall, with smiles or fonts, our lives are made richer by our Parallel Family.