Someone in the train station spoke enough English to get us around the cities of China, but this was the countryside, just across the border into Tibet, and we’d signed up for a day on horseback. Would we find ourselves adrift, clueless and helpless, at the mercy of drugged-out foreigners with whom we couldn’t exchange a single word of common language?

Our guide with a car mostly spoke cigarette, we never found out if he spoke English too because ten minutes later he passed us off to the guy with the horses. He was clearly fluent in smiling. He pointed at our feet, then up the steep road, where locals in colorful robes were already walking, some with packages of food tucked under their arms.

It was tempting to grump about walking with three horses behind us, but who can gripe on a perfect day in a gorgeous land on a fascinating trip with a wonderful loved one? Or maybe it was just the altitude.

At the end of the pavement, all the houses behind us and only hills ahead, we mounted up. There on the verge of town, the other walkers were stopping at graves and headstones, opening their packages of food, visiting the graves of those who used to live here. The sky was a wholehearted blue above the terracotta red soil, and the same sort of boisterous white clouds I grew up with in California were indolent and relaxed overhead, while locals were going about their lives without any interest in the two visitors. I could smell the horse’s skin as it warmed in the sun. My entire being felt like one big smile. 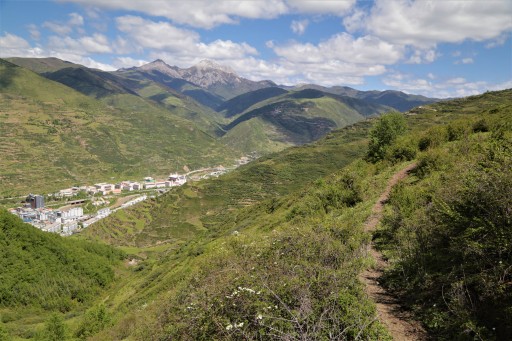 The valley stretched out as we climbed, its river curving like the natural version of the rail line being built alongside it, and we got to know our mounts. They were amiable equines, content to amble along, stopping now and then to munch the softly spikey leaves of the abundant weeds.

Up over the ridge to reach the next valley, this one more Tibetan somehow, thinner river, no railroad, a few figures in colorful cloth moving about while prayer flags leaned with the shy breeze. We reached the edge of a small town and Smiles gestured us to dismount, then waved down the road. So we went. Found a temple. Perhaps a full monastery? No one was around to explain the status of the colorful buildings fading in the sun, nor the freshly poured gray concrete of new construction alongside. When we got back he’d made soup on a wood fire and we all slurped starchy noodles together. 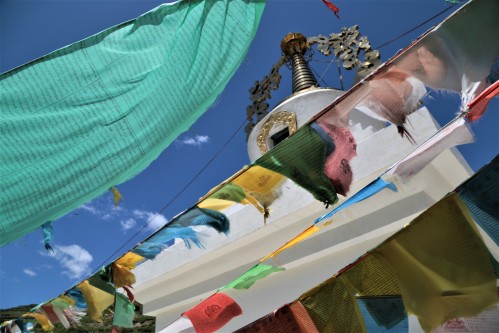 The way home was still beautiful, with the added sensations of sunburned hands on the reins and creaking sinews in the legs, the sort of pains you enjoy because they mean you’re doing something interesting, but there was another change. The horses were getting weird. They seemed nervous, sometimes creeping each other out with passes that stalled and got defensive, until they would startle and rush to the razor cliff edge together, me sawing the reins while the guide gave an increasingly tired hu-chu-chu-chyuh!

After crossing back over the ridge, Smiles waved us to dismount as we passed through some rugged crags. On the other side he waved that we could get back on, but L had the sense to decline. But I’d signed on for a day of horses, not sure when the next chance would be, so I’d ride horses. I got back on. 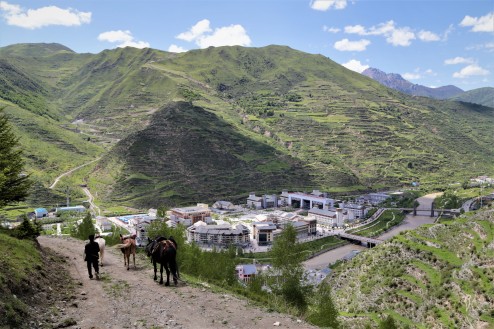 Immediately we went for the cliff edge. I swear we were hanging over the edge. Hu-chu-chyah-chyah! L looked alarmed. “Are you sure you want to ride that thing? It’s behaving almost as if…”

We looked at the weeds the horses had been eating all morning. Yup. Ditch weed. Marijuana. Could that affect a horse? I was about to ask when my valiant stoned steed bolted up the hillside. Away from the edge, but right into a tree. A low tree. Whose branches were just over the horses shoulders, meaning I was entirely inside the thing, carried resolutely forward by my horse in an impressive crackle of snapping branches and poking parts. 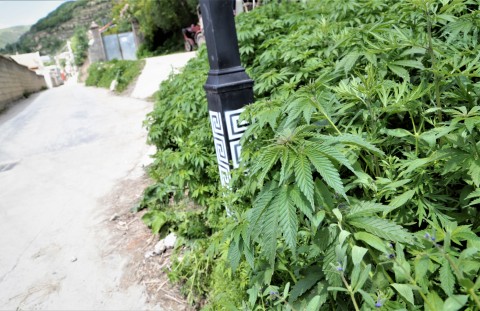 I coerced us back to the path and dismounted, hardly feeling like a competent knight in shining armor. Especially given the fact that I know appeared to be wearing just that. I gleamed with an iridescent coat of shining scales. With legs.

Maybe it was breeding season for that particular species of beetle, or maybe I was just lucky. But I was now covered in about a hundred Tibetan insects that I could see, an unknown number that I could not.

As my horse walked towards the cliff again, I took a minute to savor the joys of travel, the way it gifts you unexpected experiences like new friends, great meals, and pothead ponies who carry you into bug infested forests. No English necessary.

← Thanksgiving
Cranky grandpas and the next election scandal →

9 thoughts on “Riding horses in Tibet”