Our absent-minded bus driver dropped us off a good half hour or more after passing our hostel’s stop.  We disembarked to find ourselves across from a fantastically ancient little stone place with moss growing on the southern face, in the bottom of a steep-sided valley as the sun licked up and off the top of the west-facing escarpment.  We went in to find that the Drover’s Inn had been in operation since 1705, was overflowing with highland charm, and the cheapest room was over three times what we were hoping to pay.

Where we got off the bus.  That’s the Drover’s.

So we left the Drover’s Inn.  There were a couple more Bed and Breakfast places in the dell (yeah, that’s right, I’m calling it a “dell” because it actually was that quaint).  At the first we found the reception door, knocked, and it was eventually opened by a confused-looking lad of around 18 years, with whom I had the following conversation.

After the Zen insanity of that interaction we headed to the other one, where a sign with an arrow for reception led us down a short walkway to a blank wall.  This bus stop should be labeled as “Scottish Twilight Zone.”

The road was crazy narrow to walk along, and it was about four hours in either direction before you got to anything else, so we headed back to the Drover’s and resigned ourselves to enjoying it immensely. 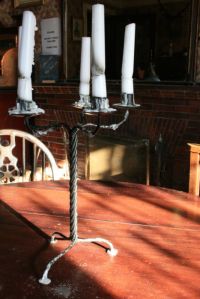 The floors were carpeted with clan tartan plaids, Rob Roy had stayed there, the walls and furniture were age-darkened wood, the floors creaked, and there were stuffed animal carcases on the walls.  Did I mention it has been an Inn since 1705, for crying out loud?  The communal bathroom had a claw-foot tub and a picture of a creepy little girl on the wall.

Our room was on the top floor, and was cozy in that it was apparently built for leprechauns.  The doorknob was at mid-thigh level, and as was the sink in the corner (leprechauns are very fastidious).  There was a slight smell in the air that reminded me of my British grandmother’s cottage in southern England.  Like tea, crumpets, tea, lace, tea, and little British farts.  And tea.

And best of all, for dinner I got a plate heaped with a massive pile of authentic country “haggis, neeps, and tatties.”  It was delicious.  Haggis, parsnips and potatoes (the latter two mashed together), with a pepper sauce and absolutely nothing resembling a vegetable to be seen anywhere in the vicinity of my plate.

No offense to Morocco, but I enjoyed it much more than the Goat-head Soup.

Just in case you weren‘t sure, haggis is made of mashed up sheep’s heart, liver, and lungs, with oatmeal, spices, and suet (fat) mixed in, then stuffed in a sheep’s stomach or intestine, and simmered for three hours.  And according to the all-knowing wikipedia, the first written reference to haggis is from a 1430 cookbook written in verse! called Liber Cure Cocorum.  As if an entire cookbook from the fifteenth century written in verse isn‘t cool enough as it is, here is the quote, if the font transfers:

Now with all that in mind, you need a closer look.

The next day I was understandably craving vegetables (the word “remorse“ comes to mind), but it was a Bed and Breakfast, and the breakfast was Scottish.  That means ham, a fried egg, sausage, fried bread, blood sausage, baked beans, two pieces of white toast, and for all the health nuts: half a warmed tomato.

K had the vegetarian version, which was the toast, beans, egg, tomato and two veggie sausages.

With that…solid…start, we quickly decided to spend the day walking.  That turned out to be an excellent decision.