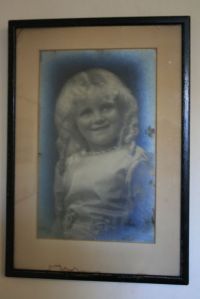 The morning after sleeping in the 300 year old Drover’s Inn (during which I admit I was a little disappointed to not encounter the ghost of the little girl on the bathroom wall) we both felt like a nice full day of exercise, me from having eaten the haggis and Scottish breakfast, Katrien from having had to watch me do so.

The lass at reception (we were in Scotland, so I can call her that) told us that about 7 miles up the road was the town of Crianlarich.  She told us we could catch a bus from there to the coast (our next destination), and we knew there was a hostel there just in case.  So we set out walking.

We started up the winding road, with basically no shoulder whatsoever, and were enjoying the beautiful day, despite the windy passage of cars, each of which barely missed clipping an elbow or foot.  We were at the bottom of a steep, narrow valley, and my goodness, it just looked so damn….Scottish!  Mossy rockwalls along farmsteads, sheep here and there, little stone houses, and a wee brook running down through the middle of it.  I stopped to take a picture and Katrien noticed a handful of backpackers walking opposite us, up on the hillside. 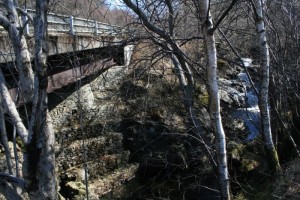 That looked better, so we jumped off an overpass (the old question: if your friends were jumping off a bridge, would you too?  The answer: yes) and made our way over, gingerly crossing a couple of barbed wire fences and greeting a couple of barely perturbed sheep along the way.

I can’t believe the lass at the Inn had told us to walk to Crianlarich, but didn’t mention that we were smack dab on the famous West Highland Way.  Okay, I’d never heard of it, but it is one of those incredible paths that cross some lucky countries.  Starting just outside Glasgow, it winds through astonishingly gorgeous countryside for about 150 kilometers (considered an 8 day walk), past Loch Lomond and up to Fort William, also passing near Ben Nevis, the tallest peak in the British Isles.  (That’s not it in the picture.) 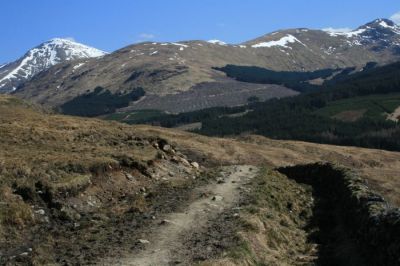 We only did one little stretch of it, about four hours worth, but we both quickly decided we want to go back sometime and do the whole thing.  If you want to come, let me know.

Now, of course this lovely experience couldn’t be just that easy, it had to be at least slightly ridiculous.  And it was.  We had not planned on doing any real hiking, so neither were outfitted for it, with one pack, no gear, relatively fashionable clothes (okay, that one’s Katrien, not me) and perhaps most ridiculous of all, I had a plastic grocery bag of food in each hand. 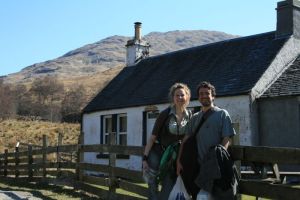 Us by one of the few houses in the area.

At one point we came up over a hill to find a “real” hiker taking a rest on one of those very Scottish stones.  He took a long look at us, looked down to his tired feet, then back at us and asked, in a lovely Scottish brogue “now who’s madder?”

He was a career military man, and there was an airforce base in the next valley over.  This became obvious a minute later as the first of the several Tornado fighter planes we would see roared just overhead.

It was pure serendipity to meet up with him at just that moment, since we (being clueless) had no idea that this was a formal and proper trail, would have followed the main body of it, which dead-ended back at the highway a short time later, but he (being less clueless than us and in possession of a guidebook) directed us to the tiny footpath that we had passed a short time before, and we headed along our merry way.  This is taken on the path we would have followed back to the road, the actual path is the little one in the center-right through the trees. 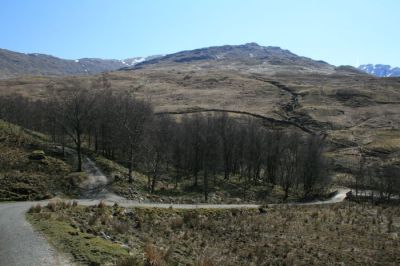 I love it when shit all works out like that.