Near death experience on the banks of the Zambezi River

The word “soothing” is itself soothing; is that onomatopoeia?

I guess that’s not enough for a blog post, so I’ll tell you about the time I almost died by the mighty Zambezi River.

We were in the middle of driving from Pretoria, South Africa, to Mansa, Zambia, which took four full days of driving.  And I mean FULL days, we didn’t really even stop to eat, except once in Mazabuka, where I went into the American-1950s-diner themed fast food place (restaurant is too exuberant of a word for it) and as if it wasn’t already weird enough, I perused the menu and asked for the rice and chicken.  No rice and chicken.  The curry rice?  No curry rice.  Meat pie?  No meat pie.  (Not sure what these were all doing on the menu of a place with drawings of Chevies with James Dean and Marilyn Monroe driving past Route 66 signs, but it’s Zambia, so we’ll give them the benefit of the doubt.)  What do you have?  Kentucky fried chicken and fries.  Despite the fact that this was not on the menu.  Okay, I’ll take that and a soda called “Tingling.”  It was actually a pretty good meal (Tingling turned out to be an excellent ginger ale).

But anyway, it was four full days of driving, so we stopped off halfway to rest for a couple days, which just happened to be at Victoria Falls, which is truly one of the most ridiculously epic places on Earth.

It is the largest waterfall on Earth, a mile long, 360 feet tall.  It was incredible.  If the falls don’t take your breath away, the cold mist that rains down on you will.  It is chilly rain under the clear, hot African sun, kind of a trip, no?

A couple of local guys moonlighting as Vic Falls tour guides took us out along the top of the falls, walking first on a handswidth-wide submerged concrete wall where you had to grip tightly with your toes to resist the remarkably strong Zambezi current that wanted to sweep you over the edge, then down to the very edge of the falls. 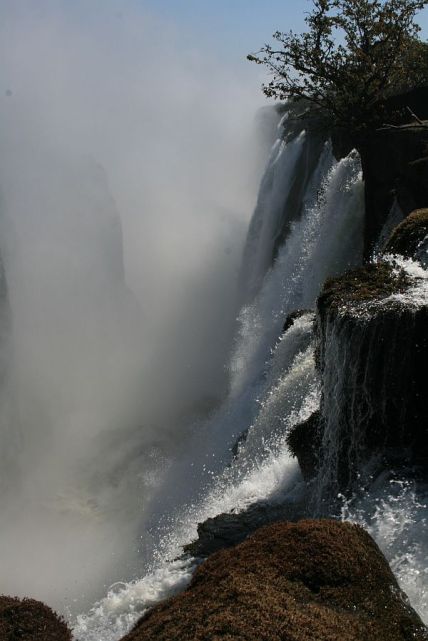 Then we went river rafting past class 4 rapids with names like Devil’s Toilet Bowl, Oblivion, and Gnashing Jaws of Death.  It was fantastic, but not when I almost died.  No, I almost died at the malicious hands of something far more evil.  Tiny little evil hands.

This, my friends, is a vervet.

Cute, right?  WRONG!  This is a deceitful, cold-hearted little servant of Beelzebub who is just waiting for you to let down your guard.  Here is another picture. 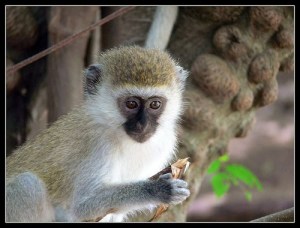 Was it the hand that got you?  The cute little, furry hand, that holds the piece of bread the tourist in front of you just gave the little guy?  Pretty cute, right?

Then I bent down to take his little itsy-bitsy-picture-wicture…
and the vile little son of a bitch was after me.
But I had no bread.  Oh but he wasn’t after bread, no no no, he was after something fresher, bloodier, living-er.

What had been a cute and somewhat irascible presence in our campground on the first day was transformed into a half dozen remarkably fast-moving furry forms of flesh-seeking malice.  Especially the little one, he was the worst.

Okay, not that small. 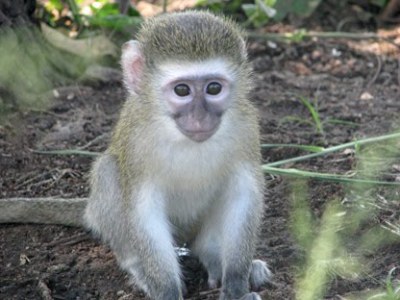 There, like that.  Inside that pooched little mouth are way too many needle sharp teeth, and those cute little hands were suddenly far too eager to rend my skin like jello in the sun, man.

Actually, here is the actual picture I took, the only one I managed before the hunt was on.

That long tail is used for balance while flying through the air prior to biting off innocent Americans’ faces.

Seriously!  The little one was pissed that I had no food, and got aggressive.  Then the adults, including the (suddenly much larger looking) alpha male picked up the mood and things got freaky, fast.

Now, I must insist on a little credit here.  I was with two women, and I let both of them go first while I stayed firmly placed between them and harms way.  And by “firmly” I mean “gradually backing away while visions of a cross between Outbreak and the Texas Chainsaw Massacre play in my head and I wonder why I didn’t sign up for health insurance before coming.”

We made it into the parking lot, an arbitrary boundary that they luckily seemed to respect.  Our hearts were racing, skin chilled, limbs rubbery with adrenaline.  At the far end of the lot a taxi was just pulling away and the driver shouted out his window “be nice to the monkeys!”

They haunt my nightmares…