April 13, 2012
Time to move on. I packed my bag (tidied really, I wasn’t there long enough to really unpack), said goodbye to the people I was just getting to know, and walked out.

Nicaragua has a clever little scheme going on. The bus routes leave from different stations, and they put them far enough apart to need a taxi to get between them. Clever clever, the taxi lobby must be powerful. Or they are just terrifically unorganized. That could be too.

Taxis always give me an icky feeling, from the juice of overcharging they always seep, to the guilt of riding along like a colonial elitist while the people on the street watch your white face float by. (This is countered by someone who worked in Peru for awhile who said “the locals take taxi’s the tourists always want to walk” but I haven’t quite come to terms with that.)

When I asked how to get to the bus station that handles traffic back to Managua (different from the one I walked to when I went to the beach) the hostel staff told me to take a taxi. Luckily my buddy Rudy had clued me in to the camionettas that run through the streets on their way out there.

(Crud, I just realized I didn’t mention Rudy yet. He’s a fellow I met in the Parque Central, laid off from his job as a truck driver at 52, no one will hire him now because they don’t want to pay his retirement. So he goes and sits in the park “If I stay home, I do nothing. So I come here. Sometimes someone will pay me 10 cordobas (about 40 cents) to go pick something up in the market.” He recommended a place to get a batido, like a fruit lassi/smoothie, and I bought him one. I enjoyed our halting conversation over our pineapple smoothies.)

Two camionettas passed as I was walking down the last block, so I posted up and waited for the next one. Once I put my bag down and sat, I actually started to feel like I was fitting in a little more. (I really cannot overstate the importance of packing lightly. A foreign face is already a lot to overcome, a giant mountain of a backpack just pushes you farther into the realm of an “other.”) I wouldn’t go nearly so far as to say I blended in entirely, but I felt like less of a sore thumb.

The pickup truck arrived and I climbed up into the back to sit next to an old lady with heavy-looking bags and across from a rather plump young woman with a sleeping baby slewing half out of her arm. The old lady stared at me with minimal interest, like I’m a puzzle she has long given up on solving but can’t help peering at anyway.

We drove through Leon, away from the downtown where the white faces congregate, out through small dirt roads where the bumps threw us against the metal frame holding the big blue tarp over our heads. There is poverty in America, but I really can’t imagine there’s a town like this in the “First World”, while they are the norm in so much of the rest of the world, varying in some details but familiar in so many. Naked children standing in dirt yards watching you pass. Pregnant women holding toddlers, watching you go by. A few crops in dry soil, heaps of smoldering garbage, stray dogs with short yellow hair and droopy teats. A sense of stasis in a world where the every day is something of a triumph.

We eventually pulled up to the bus station, wood fires making food for bellies and smoke for lungs and eyes. Stray dogs and their droopy teats. Vendors walking around shouting their wares over and over. Little bags of water. Bananas. Sweetcakes. The guy selling packs of toilet paper started to try and sell me one out of habit then we shared a chuckle. I ask if I can sit in one of the chairs for a moment, and the agelessly old woman cook behind the rickety counter jokes about how long of a moment it can be. She waves goodbye when I go.

Then I’m en route to Managua in a sweltering minivan, realizing as we leave town that we drove close to the station in the truck before heading out to the dirt streets, but I’m glad I had the reminder. Remind me next time I bitch about anything in a hostel.

After two hours of dozing we are all getting out into the chaos of UCA “station”, which is basically just a wide place in the road where the “interlocal” buses pull over. My next leg is in a sort of minibus, each ride is getting a bigger auto. The only seat left is the front, so I ride shotgun, a little old(ish) lady clambering up to sit next to me with her legs up on the dashboard since it’s not a proper seat with foot room. She reassures me she’s comfortable.

After an immeasurable period of drowsing, during which I’m just glad none of my head bobs smashed into the lady (“ay! Lo siento por el headbutt!”) I am dropped off on the side of the highway at the base of a road leading up. My guide book is a couple years old, so I don’t really expect the 15 minute ride to still cost 10 Cordoba (~40 cents) but when the shady looking driver kid spits and says 100 I balk. We end up settling on 40 and he’ll take me as far as he feels I’ve bought.

The road is steep and long, and doing it with my bag would have been an ordeal; not sure I would have made it by dark. He gets to the gates to what is now some sort of ecological sanctuary and says they charge him 25 cordoba to drive down, so to go farther I have to pay 50 more. He warns me that it’s an hour walk still to the hospedajes. If he hadn’t been so shady at the start I probably would have paid.

I pass him 40 cordoba and get out, climb over the chain the guard lowers for me and ask him how far it is to the water. He tells me it’s about 3 kilometers, and seeing my relief cautions me “suave, suave.” Go slow, go slow, patting motions with his hands. 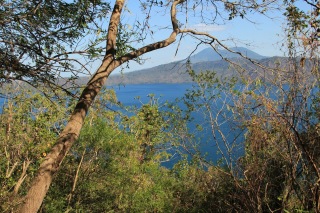 I start down the hill, and quickly glimpse blue between the branches. I am heading to Laguna de Apoyo, a freshwater lake in an expired volcano. It’s even more beautiful than it sounds. A few hours, a swim, and a good meal later, I am sitting here listening to the small lake waves on the rocky shore, nighttime crickets, and one of the cute older gay gentlemen playing his mandolin in a hammock. The bats come and go from their nests in the eaves over my head and there is a good stiff breeze, so I won’t have to slather my delicious ankles with mosquito repellent tonight.

I am one happy backpacker.