The Cartagena heat melted all my words, which ran down in an inky slide into the off-gray mattress, perplexing the mosquitoes along the way, but here I sit in Bogota, the next chapter beginning tonight…so I gotta get this ship to harbor, as it were.

After my dolphinous morning swim we spent a languorous morning doing very little on the Andiamo, the Spettiamo, before sailing to another island, where a Kuna in a palm frond hut was happy to sell us cold beer. Most of the islands have nothing on them, or just a few huts, but the ships know each and every stretch of sand with a bar. 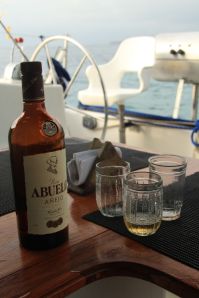 Definitely no booze cruise, but come on, it’s the Caribbean, a big bottle of rum is obligatory.

All 5 of us wanted to explore the new island, but there was only room for 4 in the dinghy so I happily volunteered to swim instead. At first I enjoyed pushing a little, but man, that swimming stuff is hard, so I latched on and rode the last part to shore like a barnacle, gazing down through shallow water filled with the fragile remains of sea urchins and sand dollars, sea grass growing up through sand like mud in the still water.

Fabio finally reached the captain of my next ship, the African Queen, and we set up a rendezvous point. We motored a little farther down the island chain and just before sunset the African Queen glided in from the horizon, a gleaming white catamaran flying the flags of Panama and Germany. I rowed over with Fabio as my shipmates sat on the deck of the Andiamo waving farewell. 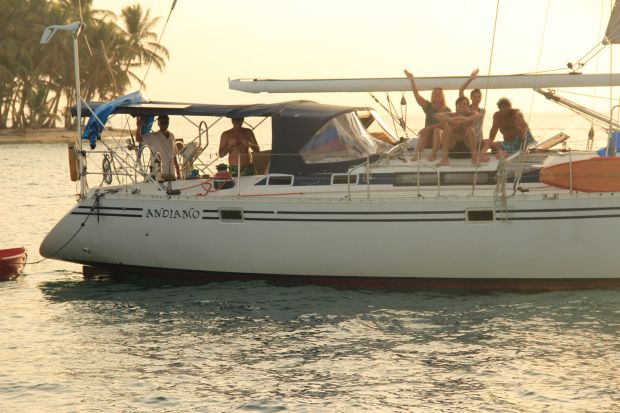 It felt really weird to be on the new ship, new people, with my old companions lined up opposite watching and occasionally shouting remarks. Like switching high schools your sophomore year, only the new one is across the street. I tried to find ways to say “don’t worry, I’m sure you’re nice, I will like you too” to my new shipmates. 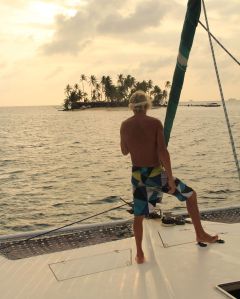 My new captain was Rudy, an Italian (who apparently has a business in Germany?), assisted by Jamila his Colombian…something. Not girlfriend…not mistress…but not just staff either. Whatever. Rudy has that taciturn likeability like a calm gravitational pull, and Jamila provided all the energy and enthusiasm we could ask for with her (what I would come to learn is distinctly Colombian) machine-gun speech pacing, with nasal overtones and enthusiasm eruptions. Colombians are a people always primed to laugh. 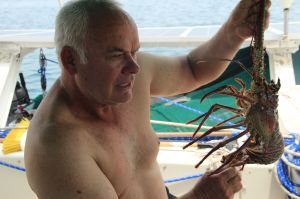 The other passengers were Steve and Brett, and Australian father and son. One of the first things Steve told me about was his obsession with torches. This got slightly less weird when I realized he meant flashlights, not Medieval flamesticks, but still. I thought he was kidding at first, but no, he talked about flashlights regularly, and seemed to have brought at least four with him. 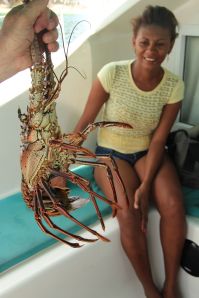 Jamila was not so sure. 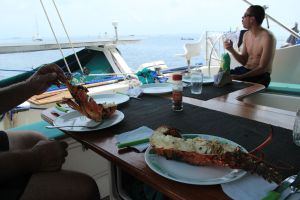 His son Brett was somewhat press ganged into this enthusiasm. Whenever he’d use his own (admittedly excellent) flashlight Steve would say “thet’s a nayce loit ye got there Brit, where’dya geddit? How miny lumens duzzit hiv?”Brett’s own positive attitude was nearly unshakable, only giving a slight ripple once when his vegetarian meal was clearly lacking, while the rest of us munched grilled lobster audibly and kinetically in front of him. He also managed to walk a perfect line between super-chill and flamboyantly gay.

We spent the night alongside the Andiamo, including some tension when the current shifted and we found ourselves floating dangerously close together. The next morning the Queen was up and gone by 6:00, a lone hand on the Andiamo waving farewell from where the crew slept in the stern.

First we headed to Porvenir, an unlovely little city-island where I got my Panamanian exit stamp in a time-honored example of the illogical obstinacy of bureaucracy. Then we sailed to our next island, fishing poles on either side of the stern tugged gently by the current behind us.

We arrived at the new place to find two islands, and a tiny third, ringed by a reef and sand bar…two wrecks… Daggnabit. We were back in Chichime. My attempt to finagle a longer San Blas tour and save some money ended up costing full price and including the same island for the majority of the time. Oh well, you win some you lose some, and if this was what losing looked like, I ain’t complaining. 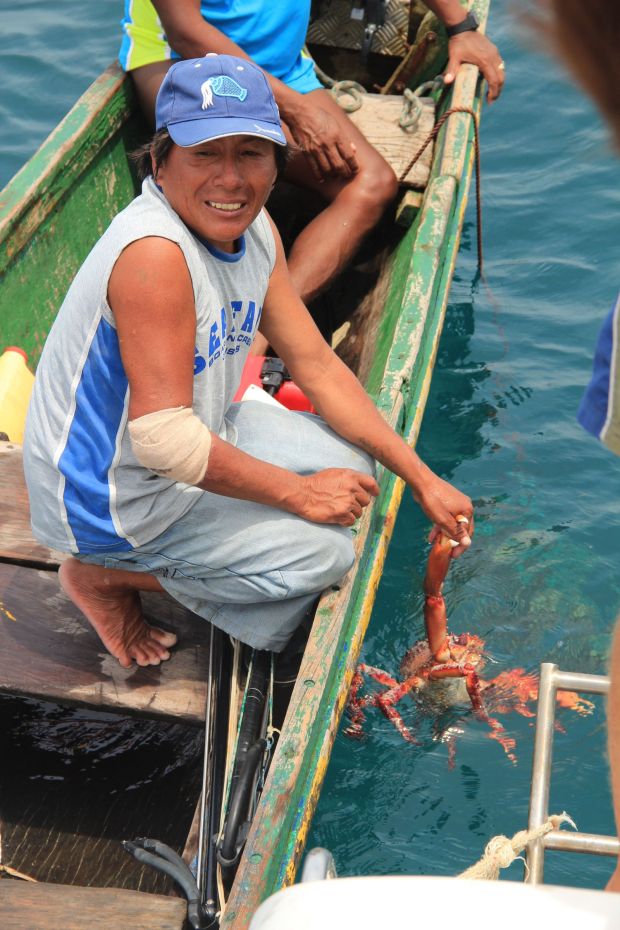 Now that’s fresh seafood. “How much for your buddy?”

The same Kuna vendors pulled up in their canoes (except the cute one with the impressive bosom who came out to visit Fabio specifically, although there has never been a single case of a Kuna marrying an outsider [without leaving the culture/country entirely at least]). 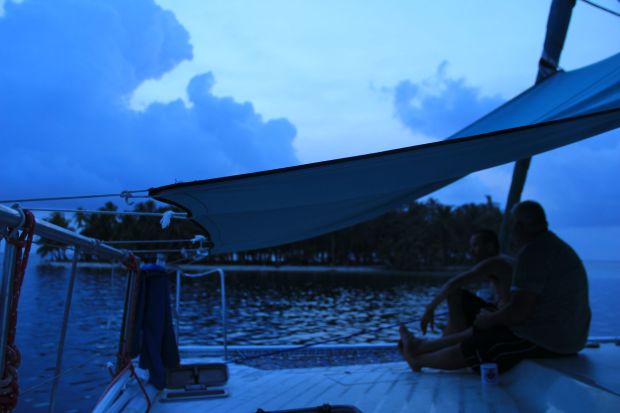 Plenty of time for blue chillin. Somebody put on some Coltrane.

Around midnight one of the Colombian ships inexplicably pulled up anchor and started backing around the other ships anchored in the lagoon. Remembering all their questions as to how many of us were onboard, the ship, and how much we paid, I mused aloud about them being Colombian pirates. Brett’s answer of “a shipload of handsome pirates? Okay.” cracked me up for a good half hour. 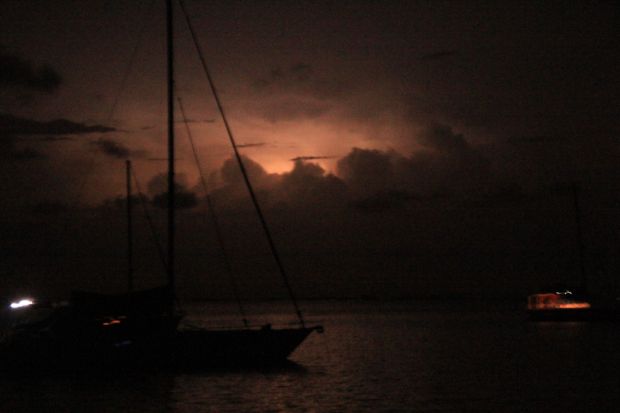 Heat lightening was a nightly occurrence.

← Today’s Schedule
Making it to Cartagena. →