My Ecuadorian Grandpa is trying to kill me.

I woke up this morning a little tired, kinda half-assed my way through our second attempt at yoga, then fueled up on the largest of the three breakfast options available, with a decent cup of local (that’s what I tell myself at least) coffee to fuel me on a good long walk up to the waterfalls today.

Leaving perfectly-tiny Mindo we picked up a companion. He was a welcome addition to a pair of animal-deprived travelers, even before he impressed the hell out of me by waltzing into the midst of a substantial-sized pack of black labs who live on the edge of town and peeing right on their porch. Ballsy pup.

We named him Oscar. His interests include peeing on things, smiling, and jumping into the jungle to flush out birds K and I otherwise never would have seen. No thank you, we don’t need a bird watching guide, we have an insane dog.

The tourist office tells you that you have to pay for the “tarabita” cable car which runs for 530 meters high above the jungle…and costs $5 a pop. I am perfectly fine with chipping my 5 bucks into the local economy, but we were enjoying our walk so much we continued on past the cable car to the upper falls, where another local family is trying to make a living off tourist visits too.

Their property includes a cute grandma, a waterfall, and zip lines, though the lattermost were closed today, either because it’s midweek in the tail end of Low Season, or because a rival company was shut down a couple weeks ago after a tourist died falling off a line. Oops. Not the first such accident in Mindo either. (We walked past the property, the big red government sign declaring their closure pasted in the window of an empty ticket office.)

The Tarzan Swing doesn’t need staff or supervision though, so we took a couple turns on our way down. Oscar waited patiently, just far enough away to ensure he doesn’t get kicked. I got the feeling he’s seen it all before.

Down at the river we met Cute Granma’s cute husband. Raul has had his nose broken at least once in the past, and there was something shaman-like about his steady brown eyes. He showed us the concrete slide, cautioning us “don’t lie down, stay upright”, and then pointed out the path to the waterfall.

Looking at waterfalls is all well and good, but I felt a bit peckish for adrenalin. Normally I wouldn’t think of a slide as much of an adventure, but this f’er launches you out a good 10 feet above a rather excited and chilly river, plus did I mention it’s concrete? 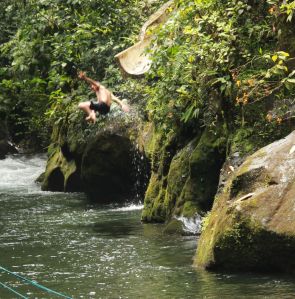 I convinced myself, dunked in the little pool at the top, then pushed off. Holy crap that thing was faster than I expected! I had a moment to worry that my momentum would push me up onto the waterless and abrasive side before the turn spun me around, spit me out, and I found myself flying for a perfect instant through the air, backwards, before hitting the cold river.

The current was stronger than I expected, and I was reminded how much less buoyant fresh water is, but pretty quickly I was bumping my knees on the bottom and dragging myself out with a little help from the soggy ropes strung across the flow. That was fun!

The waterfall was impressive, an angry plunge of white water and swirling currents. He pointed to a little ledge and repeated his “jump of the waterfall.“ Yup, he said “jump.” Then he said 12 meters. That’s 40 feet, or a four-storey building. Then he threw a stone down to show me where a suitably insane person would throw their hapless physical form if so inclined. The rock fell a long way before disappearing in the belligerent looking foam below. Raul’s calm brown eyes settled on mine.

I looked at the falls for a couple minutes, not deciding anything, just letting my brain soak it in. Then I decided to do it. Why not jump off a friggin cliff into a raging river? I went over and stood above the drop, getting ready. Then I looked down. Then I had to think about it a bit more. A four storey building?

I decided I didn’t have anything to prove to anyone, dammit. I’m old enough to only do something if I want to…dammit. Not gonna do it.

Then I thought about what my brother would say if he were here and hey, they wouldn’t let you do it if it weren’t safe, right? Let’s go!

Then I considered the relative importance of cash flow versus safety in developing countries. Looked down again. No way.

How would I feel if I didn’t do it, walking away from a challenge, taking the easy way out? Let‘s go!

I got ready. Then thought about that moment where I stepped off into space. How hitting the water would be. The current. Nah, let’s go home.

You get the idea.

Then just for extra credit the ladder back up was a rusting, curved thing of metal wire totally unattached to the stone. Not a good day for fear of heights.

(PS. Does anyone know how to get wordpress to not automatically include any photo I upload for a post in the slideshow?)

← Turns out I’m avianophilic.
Finding waterfalls in Mindo to not jump off. →

9 thoughts on “My Ecuadorian Grandpa is trying to kill me.”