Finding waterfalls in Mindo to not jump off. 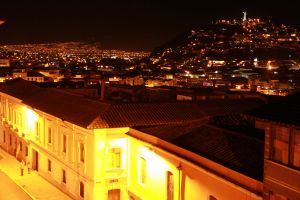 Yikes, stop blogging for a day and four sneak past. We’re back in Quito now, where I admired the sunlight slanting through the thick banks of exhaust barfed out by the bizarrely numerous city buses (there are at least 3 distinct networks of bus here, like three different ant colonies all living in the same tree). But somehow I seem to love this city…

And now there’s a show on about aliens and the Mayans, apocalypse, Wright Brothers, and the 2004 tsunami, but I will mute it and try to make sense here… But what if, like, the angels are aliens, y’know? And they, like, come back for the Second Coming, with, like, death rays and Star Trek shiznit? Wouldn’t that be, like, totally unexpected?

Sorry. I had dessert tonight. 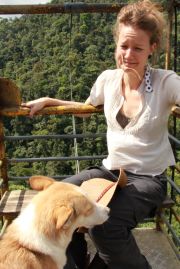 Our last couple days in Mindo were as awesome as the first couple, with another 5-6 hour waterfall walk, including crossing the gorge on the “tarabita” cable car which was high enough to cause K to make this face. We thought we had repeated our canine luck when this lady, Bonita, came across the tarabita with us, but she was apparently only there to console K during the crossing, and declined to walk the rest of the way with us.

(By the way, we saw Oscar the next day, chilling by the river with some tailgaters, smiling as big as ever. I love that dog.) 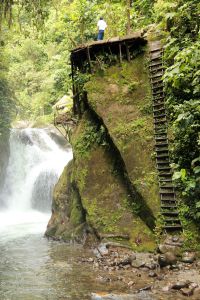 Then a couple hour walk on one side to see 5 waterfalls, the first of which was the bottom of the one I jumped off, maybe this view gives a better idea of scale? And of course the ladder, that darling piece of Ecaudorian engineering. 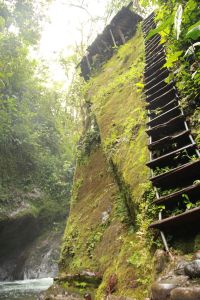 The other waterfalls were beautiful, and included the occasional rickety plank bridge held together by wire as thick as a paperclip, a big red millipede, and a group of Ecuadorians we would pass on the trail after each waterfall. The day was warm and the water was delicious on bare feet, so I took off my shirt, then shoes, causing one of the guys to comment to me “you’re wearing less and less every time we see you.” I looked down at my swim trunks, my sole remaining clothing, and answered “my apologies for next time.”

Next time we saw him he was wearing as little as I was, and we smiled conspiratorially. “Es mucho mas comodo!”

The second half of the walk was to the solo Cascada la Reina (“the Queen of Waterfalls“) whose trail was beautifully unkempt and had few other walkers. The actual falls was up in a slot canyon reached by a staircase built on top of a fallen/placed

tree. No one around, roaring waterfall and its resulting wind, wet stone, dripping lichen, and absolutely perfectly cold water left it as one of my favorite places on Earth. The thought of what it must have been like for the first person to find it left my mind jiggling. Pictures do not do it a smidgeon of justice. 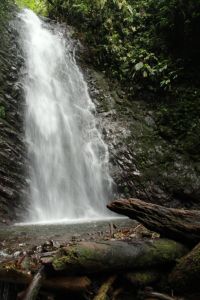 By the time we made it back, the leg muscles were griping in that beautiful chorus of use, fighting with the stomach for attention, and we ended up in a wood-fired pizza place that produced an absolutely fantastic cotto e funghi pizza which combined absurdly well with the ridiculously large Ecuadorian beers to produce a thoroughly satisfied vagabond.

(PS. Apparently we’re heading into the jungle tomorrow for a few days (4?)…no internet out there. See you when we get back.)

← My Ecuadorian Grandpa is trying to kill me.
Anybody seen a trumpet-playing Mexican around here? →

2 thoughts on “Finding waterfalls in Mindo to not jump off.”