We thoroughly enjoyed Playas, but it was time to move on again. First breakfast, where just in case we hadn’t noticed how friendly Ecuadorians are, the owners gave us their phone number and offered to meet up in Guayaquil over the next couple days. Unfortunately we’re headed the other direction, with a quick bus ride then a turn in a camioneta, arguably my favorite Latin American transport option, also known as riding in the back of some dude’s pickup truck for a quarter.

This took us to the side of the highway, where we waited to flag down a bus to Salinas, the wealthy counterpart to Playas’s working class clientele. The bus was packed, and K and I squeezed into the last bit of space on the front steps. The driver signaled that we had to sit down, and the ticket-collector guy stuck a newspaper in my face, gesturing with it at my crotch.

It took me a second to realize he wanted me to sit on the newspaper. A couple miles down the road I understood why, as the engine beneath the floor started cooking my culo.

The ticket guy spent the trip picking his nose, burping, and whenever he’d jump out to open the luggage compartment for someone a noticeable odor of methane+ would follow him back in. he was very considerate though, and would leave the door open for a little while.

That took us to Libertad, then one more local bus to Salinas. On this one a local dude got on with his acoustic guitar and started singing us a song about Jesus. I’m not super good at ignoring people, and the resulting eye contact helped him zero in on me.

As he came around to collect coin donations he paused to tell me he recognized me from the TV. I was confused, “you saw that thing in Colombia?” He nodded, then went on a rant whose level of Spanish was far beyond me, but I think I heard the word “archeology” in there at least once. I highly doubt he saw me on TV, but it was fun anyway.

We found accommodation for a decent price after bargaining them down, then getting a further discount for paying with cash (the “sweet, now we don‘t have to tell the tax collector you were ever here” discount). Restaurants in town were more expensive too, but we had a grocery store across the street and a fridge in the room, so returned to the pattern of having one warm meal per day. For the rest we snacked in the room, too often while watching whatever sitcom was on the single English channel. (My judgment: Big Bang Theory is pretty good, but Two and a Half Men is idiotic. They occasionally have a good joke, but then they explain it.) 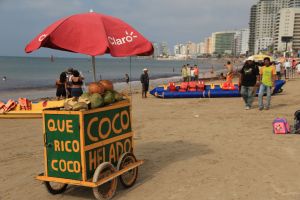 Salinas had two beaches, though one was thick with rusting bottle caps, so we tended towards the other. Turns out rich families dig holes, throw sand, and eat ice cream just like the families in Playas, though they treat the vendors worse and don’t talk to strangers.

It was a pretty sedate week, quick swims in the surprisingly cold ocean, slow walks around town, working on a project, and eating in the room except for lunch. For that I’d head a couple streets away from the beach to an eatery marked only by the plume of gray smoke from the barbecue out front. I’d take a bench and enjoy a bowl of savory sancocho (fish soup with a hunk of canned tuna, a piece of starchy plantain, and a thick wedge of yucca), a cup of some sweet (usually greenish) juice, and a plate with fish-or-chicken on a bed of white rice that served as an excellent medium for the hot sauce. Plus the waiter and I had moderate Man Crushes on each other.

← A beautiful place to sit, eat, and die.
Any computer wizards around here? →