Welcome to the Man Shack.

With the Ecuadoran sun overhead I wear my hat every day, and the Hat Hair was just getting too painful (for K) to look at, so it was time to get another haircut.

Ecuador is Haircut Country #10, which is pretty cool. I do so like them round numbers. The decathlon of man-tenance was completed in a 6 foot cube made of weathered boards whose blue paint was submitting to the elements at a graceful yet relentless pace. It looked like a storage shed you’d find in a train yard. Or the little box where my old public high school kept the hurdles (after they stopped letting kids use them for fear they’d get hurt) that we walked past for three years without noticing until the door fell off during my senior year.

My barbershack sat in understated solitude opposite the market, on a broad street where motorcycle taxis (tuk-tuks) puttered around. I found it yesterday, but couldn’t get a haircut because the entire town’s power was out. Again. The older gentleman barber looked up at me through his bifocals and shrugged. “Come back tomorrow.”

So this morning, while the power was still on, I walked over, waiting outside while he finished shaving the jowly neck of a septagenarian who looked like a Latin Ernest Hemingway. The gentleman barber himself had the calm eyes of a man who knows his trade and has known it for decades, watching the world outside his wooden cube change a little each year. When I asked his name he presented himself with dignity and formality, extending his hand with a smile at making my aquaintance. His name was Francisco de la Piedra.

I took a seat in the creaking wooden chair with black leather cushions just lightly cracking in the heat, ready to give the customary terse description, “short on the sides and back and a little longer on top.” I always suspect I could just say “generic male haircut” and get the same, and today I was right. Don Francisco didn’t ask, just picked up the buzzer and ran it into the hair on the back of my head.

Not sure if it’s my hair itself, or the abuse of sun and salt it’s been receiving lately, but my hair was too thick for his veteran tools. He adapted, coming at my apparently overwhelming head of hair in little swipes, a fighter plane reluctant to fully engage the enemy, sweeping off small pieces each time, though the motor would labor and quaver even still. 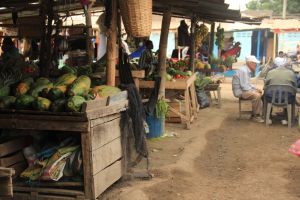 I sat watching the market across the street, where a stout fellow in a dirty apron carried a massive fish over and dumped it on his table with a thump and a grin. (The fish did the thumping, he did the grinning.)

Soon I felt the wind on my neck in that beautiful haircut freshness, and it was time for the scissors. The buzzer had barely handled my hair, and the scissors graduated in the same class, but Don Francisco managed. Of course, this being a Man Shed, he didn’t dilly-dally around with any pampering frills like water, and the antique shears did a fair amount of pulling in addition to cutting, but the hair kept falling to the floor as he worked his way up to the top of my head.

I have long since come to terms with my British Hobbit heritage, complete with hairy feet and “modest” height, but in parts of Latin America my 5’8″ gets me straight onto the basketball team. This was one of those times. The wooden chair scoffed at new-fangled upstarts that rise and lower, but I got the feeling Don Francisco was kind of approximating where the top of my head was as he reached his arms up over my seated form, scissors crunching.

In the market across the way an old woman sold a young boy a massive bunch of bananas, still on the stalk, which he hefted onto his narrow shoulder and walked away, though I don’t know how he could see, much less walk under the burden.

Then it was time to tidy up the edges. I negotiated the line between relaxation and nervousness as he came at me with the straight razor held in hands that themselves seemed to be negotiating the line between assurance and trembling. I remembered Don Francisco shaving the jowls ahead of me and relaxed. Not much I could do about it anyway.

But he was flawless, and soon I was walking through the market with that feeling of invincible beauty that comes with a fresh haircut. I am sure all the market vendors watched me pass, the women with lust and the men with envy. I could hear my own theme music matching my steps as I strutted through the chaos. Women shoppers stood with plastic bags hanging forgotten from their wrists as they gazed at my passing beauty, and the young men wanted to do things to make me like them, wondering where I got that killer ‘do.

Hat Hair decimated, cooler noggin temperatures, and an afternoon swagger. Not bad for $2.

← Happy rebirthday, it’s gonna change you life.
Why is the stink of feces such a common part of traveling? →

4 thoughts on “Welcome to the Man Shack.”