Why is the stink of feces such a common part of traveling?

With the sand of our ill-fated attempt at San Pablo still on our feet, we arrived in Montanita, arguably the tourism capital of the Ecuador Coast.

When we stepped down from the bus in San Pablo, we weren’t sure which way to go, but there was no such doubt in Montanita, as one side of the highway was bare dirt and dried weeds, while on the other the ocean sparkled on the other side of three blocks of solid hostels, restaurants, and white faces. 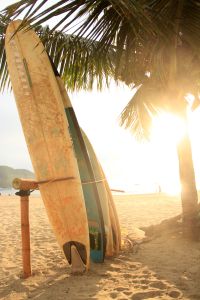 In San Pablo our backpacks and flip-flops made us oddities, but in Montanita we were the majority. We crossed the highway into town past a pair of Dutch lads in fashionable hats and polo shirts who were discussing whether to go back to the hostel, or get pizza first. Pizza? Where are we?

Straight ahead was clearly the tourist hub, so K and I turned right instead, hoping to find one of the cheaper accommodation options that usually cling around the edges. We looked in a couple, turning one down as too expensive, one as too beer-soaked, and one as surprisingly unwelcoming in a country that has otherwise been so friendly (saludos don Gustavo!)

Carrying backpacks into and out of hotels gets old after the first half dozen, so we chose a modest-looking inn. As they led us around to our room out back we passed a drain somewhere that stank. My glance at K said “I’m sure glad our room isn’t on this side!” Nope. Our room was out back. By the river. And by “river” I mean stagnant side pool clogged with garbage that is apparently never rinsed out and is full of the most pestilential-looking murky water I’ve ever seen, and whose smell makes the gas station bathroom seem like a caress of ocean breeze.

I got diptheria just from looking at it.

The room itself smelled of mold/mildew, with a strong second note of diesel fuel, but alongside the Septic Swamp outside it was…less gross. We closed the window and marinated in it. And just to make it really nasty, there was no water the entire time we were there, the sink and shower were ornmental only. It was like Tantalus, only grimy.

We dropped our bags and immediately went looking for somewhere else to stay the next night, finding three better options within fifteen minutes. The next morning we woke with the stench of the stagnant sewer-river in our noses, down our throats, and coating our hands and faces. We moved before breakfast.

After the dual initial shocks of the stank and the Spring Break tourism, Montanita turned out to be a pretty nice town. 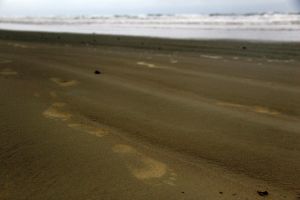 We’d breakfast on fruit salad, yogurt, and granola in our hostel kitchen, then I’d work on a project for a few hours before heading out for an “almuerzo,” the lunch special of soup, main, and fresh fruit juice for $2. The afternoons did what afternoons do, often with the help of a walk on the beach or stroll around town, then another couple hours of project work before a dinner of street food.

On the street with a dollar coin in your pocket you can choose between succulent-but-small skewers of various meats, a burger with a cardboard-thin patty of Grade F meat (70% grease, 30% tendons) with toasted bun and slathered in ketchup, or our personal favorite, an ear of corn on the cob, roasted over a charcoal grill next to you, then topped with salt or a layer of shredded white cheese held on by brush-strokes of mayonnaise. If you have $1.50 you can get a “burrito” from the cart on the end that is decent, despite bearing no resemblance to the beloved food-tubes of my homeland. (Burritos are Tex-Mex, created in America, and only barely trickling back into the Latin lands of the migrant workers who gave Uncle Sam his best meal since Jambalaya.) 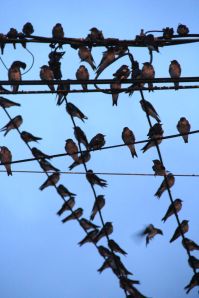 Don’t worry, the food carts underneath all have umbrellas.

For whatever reason, I only took three pictures in Montanita, all three of the birds who gather every evening in their hundreds on the wires downtown. (The other two above are from the future…oooh, trippy!)

Montanita was a nice place, but wasn’t too hard to leave.

3 thoughts on “Why is the stink of feces such a common part of traveling?”