The country is freezing, and in unrelated news: if I stay too long I’ll have to eat the ones I love.

Spring is waiting for something this year. It’s the first time Belgium has had this much snow in mid-March since 1952, it’s the coldest March (23rd at least) since 1873, and the big storm a couple weeks ago led to a record length of 1,038 miles of traffic jams during rush hour (which, by my rough google maps calculations, is enough to span the length of Belgium upwards of five times).

Personally I think Spring is being polite, and waiting until we install the blinds on the full-length bathroom windows so that when the neighbors return to their backyards they won’t be able to chat with us while we’re in the shower.

“Is that fresh lemonade? Can I have some? Let me just finish shampooing real quick, as you can see, I’m almost done.”

The house may be under construction (which doesn’t bother me in the slightest), but I consider it a lottery win to have found. Not only is it nice inside, good location, and a great roommate/owner, it also has chickens. Because Belgians do that. 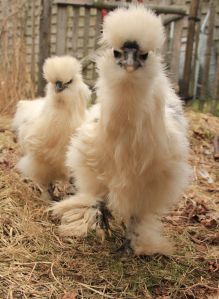 And not just any chickens! These are two Chinese silkies who are nearly never more than a meter apart, have curious personalities, and have promised me eternal love in exchange for the wax rind of the gouda cheese that I eat large quantities of. I adore them already, but these are not just pets and if I stay too long I’ll have to eat them.

I give them different names every time I see them. Today they are Agnes and Maurice. Yesterday they were Mortimer and Maximilian. I have no idea their genders.

But for now I am enjoying my walks around our new hometown of Lier. There is a rather impressive public swimming pool complex with a normal lap-swim pool, sauna, Turkish steam bath, and four other pools of various temperatures and currents for kids the kids; the open Grote Markt central plaza is all repaired after a plumbing project last year found remains of a Roman chariot; and the library has a reading cafe where I sat for a few hours with the English-language guide book for Sri Lanka I found.

In other news, I am now going to Sri Lanka.

But first, it’s chilly strolls in my boots (which do not travel with me, despite being made for walking), periodic indulgences in Belgian food (fries of course, plus beer-based beef stew, dark chocolate, and a tasty homemade rabbit stew, and Luikse waffles asap), and the upcoming spectacle of K’s ridiculously adorable niece hunting for Easter eggs.

We’ll just have to see how much ice there is on Sunday before deciding whether the hunt is indoors or out.

← I can’t help it. When it comes to homophobia, a sentence or two just isn’t enough.
Happy Eostre and Easter from Belgium! →

2 thoughts on “The country is freezing, and in unrelated news: if I stay too long I’ll have to eat the ones I love.”