Miracles, misery, and memory on my last night in Turkije.

We live in an age of casual miracles.

Yesterday I woke up in Hasankeyf, and went to bed in Diyarbakir. Tonight I will sleep in Istanbul, and tomorrow I will travel to Tel Aviv, flying at an incomprehensible 500 miles per hour through the air, among people who won’t even bother to look at the clouds anymore. 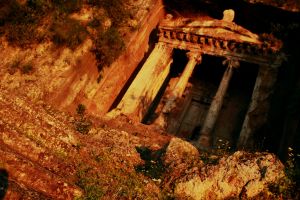 Perhaps humans are meant to wander, or perhaps to till the soil of a single valley their entire life, but my last three weeks have spanned from the cave houses of the world’s first empire to the skeezy waiters in a cruise ship town. I’ve walked up to the 4th century BC Tomb of Amynthus (right) in Fethiye, down the hill of Mardin towards the plains where Babylon rose and fell, and around the ancient fortification walls of Diyarbakir, which stretch for six kilometers, built of history and covered in garbage.

And tonight I walk the ancient streets of Constantinople and the modern ones of Istanbul, and all the millennia are irrelevant in a place utterly defined by the absence of one woman.

With one night in this unique city, I had a daunting array of choices available, the tyranny of choice that humans think they want but drives them mad. What to do? Whatever I want, so long as I enjoy it and don’t think “Maybe I should have done something else.” 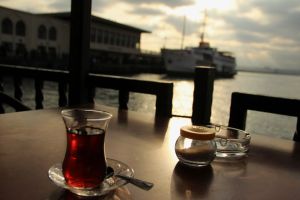 So I had a glass of çai next to Kadiköy harbor, where the ferry traffic between continents never stops, and everyone has someplace urgent to go but me. The sun was getting tired in the sky, and the Hagia Sophia stood a graceful statement in slanting sunlight across the Bosphorus.

The prospect of returning to that side, where she and I walked together, was too much. So I hid on the Asian shore, where a single day’s passage had left less reminders.

I wandered, camera close at hand and a specific bittersweet song stuck in my head, and found myself taking pictures of things I thought she’d like. Walking away each time, I struggled to balance the urge to banish the tears with the importance of feeling the emotion. It’s a path I find difficult.

One last Turkish dinner, yet another new type of kebab to try (food posts to follow…someday), and back to the hotel where I was so vigilant against bed bugs while making my decision that I didn’t notice the rat traps in the hallway, or the odd tube that emerges from the wall to drain into my shower. I sure know how to pick ’em.

Anything else for my last night in Turkey? I think a baklava and one more çai should do the trick, though I suspect the sight of her favorite dessert will be stronger than even my epicurean tendencies.

Thank you, Turkey. It has been a rewarding few weeks and my memory is full with your details, but your streets are too full with my memory.

← Two travelgasms and a tragedy. Hasankeyf Part 2.
Where am I? →

6 thoughts on “Miracles, misery, and memory on my last night in Turkije.”